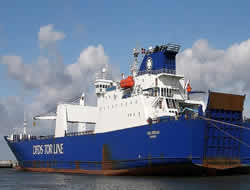 Danish lawmakers have approved sending a cargo ship and a warship to pick up Syria's most dangerous chemical weapons.

In a 97-14 vote with 68 absentees, parliament decided Thursday to send down the privately owned container ship Ark Futura and Danish frigate HDMS Esbern Snare with their nearly 300 staff.

Parliament also decided to send 19 special forces who will act as bodyguards for Sigrid Kaag, the leader of the team charged with destroying Syria's chemical weapons.

The Danes will work together with Norway, which is sending frigate HNOMS Helge Ingstad and transport vessel MV Taiko. The flotilla will carry the chemicals from Syria to a yet-to-be determined port in Italy where they will be transferred to a U.S. ship for destruction at sea.

www.turkishmaritime.com.tr
This news is a total 1684 time has been read