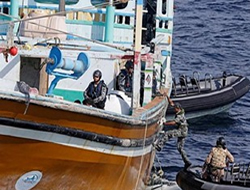 Australian personnel onboard 'HMAS Melbourne' have seized and destroyed amphetamines valued at approximately $11.3-million during two separate boardings over the past week in the Arabian Sea as part of the Combined Maritime Forces.
Approximately $6.2 million of amphetamines was discovered during the first boarding on 13 December 2013 and a further quantity valued at $5.1-million was found when a second vessel was boarded on 16 December 2013.
On both occasions, a boarding party from HMAS Melbourne conducted a search of the dhows during which they discovered and then destroyed suspected narcotics. Commander Brian Schlegel, Commanding Officer HMAS Melbourne, praised the professionalism of the Melbourne boarding teams during the two operations.
“The boarding party, operations team, flight crew and for that matter all of the ship’s company conducted themselves in a highly professional manner during these boarding operations,” Commander Schlegel said.
Commodore Daryl Bates, AM, RAN, the Australian Commander of Combined Task Force 150 commended Melbourne’s efforts and the other nations involved including the US Navy P-3C aircraft and Canadian ship HMNZS Toronto. “This removal of another 8 kg of amphetamines, combined with the 9.8 kg seized last Thursday, will impact the funding network of the terrorist organisations that rely on these shipments for income,” Commodore  Daryl Bates said.
www.turkishmaritime.com.tr
This news is a total 1396 time has been read