Ardmore CEO: A second round of strong tanker rates likely 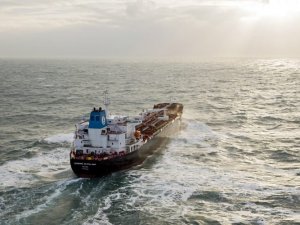 A global oversupply of oil resulting from lower demand due to the COVID-19 pandemic and high production level has seen the unprecedented shortage of storage capacities translating in high rates for floating storage.

Tanker owners have been reporting high earnings for the first quarter of this year amid soaring rates increasing by the week as demand for tanker storage shoots up.

The depleting on-shore oil storage capacities are expected to be capped by mid-May, according to the estimates from the International Energy Agency (IEA). IEA estimates that there are approximately 100 million barrels of available operational capacity in storage as of the end of April.

“Based on these levels of oversupply, approximately 20% of the world tanker fleet could be committed to floating storage by the end of June, which is unprecedented. Floating storage is expected to rise rapidly as a practical and viable option,” Paul Tivnan, Chief Financial Officer of Ardmore Shipping, said in a conference call.

According to Ardmore’s CEO Anthony Gurnee, under such market conditions, the value of floating storage could go extraordinarily high resulting in the second round of strong tanker rates.

“In particular, if and when the oil market reaches max capacity for shore oil storage, we may enter a new and potentially more volatile phase of the tanker market, and if and when oil demand rebounds with an economic recovery sometime in the third quarter as the IEA are forecasting, we would expect more demand-driven volatility, potentially carrying into the winter.

“When an economic recovery does occur, oil demand would rise with it, with oil products available but in the wrong locations and a significant portion of the world tanker fleet still tied up in storage. This, we believe, could result in potentially a third round of strong rates,” he said.

The fleet growth is expected to be limited in the upcoming two years staying at around 1.7 and 1.8 percent in 2020 and 2021 respectively.

The MR order book is at an exceptionally low, with 173 product tankers on order and with around 80 MRs over 23 years old, which will be the likely candidates for scrapping.

As a result of robust tanker demand, the rates in the second quarter have been rising even further, with MR voyages being book at $ 24,000 per day, with 55% of fixed for the quarter.

Gurnee said that over the past three weeks the company’s MR voyages in progress have been earning $28,200 per day.

This news is a total 550 time has been read
Tags: Ardmore Shipping