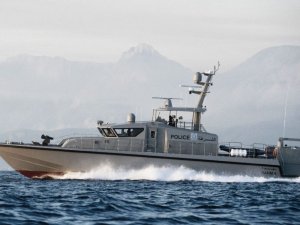 The shipyard had signed the contract to supply 14-off ARES 85 Hercules Fast Patrol Craft to ROPCG to be delivered within a four-year acquisition program. It is also known as the first naval export program to Sultanate of Oman ever accomplished in Turkish Republic history.

ARES 85 Hercules is capable of achieving high-speed levels of up to 55 knots which will be used to patrol and secure the nation’s waters, to prevent arms and drug trafficking as well as illegal immigration and to control human trafficking in the Gulf of Oman. Along with its 12.7-mm auto stabilized remote-controlled naval gun to provide versatile firepower that can be adapted to a wide variety of potential scenarios; the vessel has a suite of naval communications equipment, electro-optic (E/O) sensors and X-band naval radars. The vessel can launch and recover a military-type RHIB for boarding and SAR missions.

The ARES 85 HERCULES boats are armed with a 12.7-mm auto stabilized remote-controlled naval gun providing them versatile firepower that can be adapted to a wide variety of potential scenarios. The vessel is equipped with a suite of maritime communications equipment, electro-optic (E/O) sensors and X-band Naval Radars.

Moreover, the shipyard has been providing extensive operator and maintenance trainings to over 200 personnel of ROPCG for approximately 300 days within the shipbuilding program via ARES engineers, specialized and certified tactical trainers. The vessels will be delivered with 7-year hull warranty and an onsite ARES team of engineers will provide 24/7 warranty engineering and technical support to the end-users in Oman.