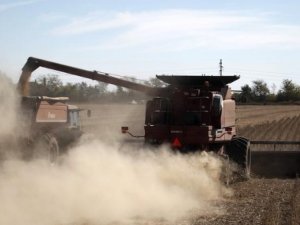 Grain companies agreed to give the port workers in Rosario an end of year bonus – a much needed income boost in a country suffering from inflation and devaluation of its currency.

“We just finished finalizing the agreement with the companies, so we will end the strike,” Edgardo Quiroga, secretary general of the General Workers Confederation of San Lorenzo, told Reuters.

Agro-export giants Archer-Daniels-Midland (ADM), Bunge, Cargill and Louis Dreyfus, known as the “Big Four in world grain trading,” own ports in Rosario, the agricultural center of Argentina. These corporations make up 75-90 percent of the total global grain trade, according to some estimates. Eighty percent of all grain, pressed oilseed and soybean exports are loaded and shipped to China, India and Europe from these ports.

Along with Proctor & Gamble Co., the “Big Four” grain companies are likewise facing court orders in Argentina for alleged tax evasion. In October 2011, the Argentine government accused Bunge of underpaying 1 billion pesos (US$248 million) in taxes and two Cargill executives were charged with tax evasion.

According to Argentine authorities, ADM, Cargill and Toepfer “used tax havens and financial operations abroad” in order to evade taxes.

Ricardo Echegaray, head of the Argentinian revenue service (Afip), told The Guardian in an exclusive interview in 2011 that transnational traders are exporting not just soy, but a giant chunk of their vast profits out of Argentina.

Until 2007, he said, Bunge paid about US$100 million in corporate income tax to Argentina annually.

“Then it (Bunge) decided to set up an office in the tax-free zone of Uruguay’s [capital] Montevideo. From that date, it suddenly declared no gains in Argentina. We cross-checked with Uruguay and we found they had not exported anything from Montevideo and had almost no staff there,” Echegaray told The Guardian.

This news is a total 925 time has been read
Tags: Argentine, Rosario, Grain Companies, Edgardo Quiroga