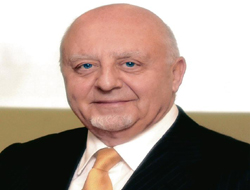 The logistics giant argues that the region around the Marmara Sea needs at least two further facilities to make the most of transhipment opportunities.

The logistics giant argues that the region around the Marmara Sea needs at least two further facilities to make the most of transhipment opportunities.

THE AREA around the Marmara Sea needs at least two deepwater ports to enable Turkey"s foreign trade to grow further and to turn the Istanbul region into the de facto transhipment centre for Black Sea-bound cargo, according to Arkas Holdings.

The global logistics giant knows what it is talking about. As well as being one of Turkey"s top owners, it is a major force in the port industry and ship agency business, while a total of 42 companies operate under the Arkas Holdings banner.

?We definitely need at least two, if not three, deepwater ports, not just to open up Turkey further, but also for the Black Sea where trade is booming,"" says Lucien Arkas, company chairman.

?The Black Sea is the southern gateway of Russia, which can"t be served through St Petersburg alone, and is also the sole access to Ukraine, another huge market.

?Container volumes to these countries are growing all the time, which means bigger ships. But you can"t have these vessels travelling through the Bosporus. Also, the destination ports are small, and congestion involving 5,000 teu ships would prove expensive.

?It"s much better to distribute containers in Istanbul on to 1,000 or 2,000 teu feeders that can carry cargo to a wider geographical area. The transhipment costs would be lower than the cost to discharge at one single port in Russia or Ukraine.?

Arkas already handles Black Sea cargo at its Marport terminals west of Istanbul, where the draught is up to 14.5 m. It transhipped 600,000 teu in 2007. This figure reached 275,000 teu in the first fourth months of 2008, and the company estimates that it will hit 825,000 transhipment teu for the whole year.

A total of 1.3m teu passed through the port in 2007 while the target for 2008 is 1.5m teu. Throughput capacity is 1.7m teu. Arkas runs 23 containerships in the Mediterranean, serving all industries, and has the fifth-biggest volume capacity in the region.

?We are already transhipping at Marport, but we need to decide what should be done for the Marmara area as a whole, because volumes to Black Sea countries are increasing dramatically,? says Mr Arkas. The ideal location for deepwater ports would be in the Izmit Bay area. There are lots of projects in this area for ports, terminals and quays.

However, Izmit Bay has a large Navy base, and the Navy must approve each project. Because of the number involved, it has asked the government to develop an overall master plan. While time will be lost in drawing up the plan, it will make development easier in the future.

Arkas Holdings is already familiar with the necessity to improve infrastructure to meet the needs of growing trade. The company"s new car terminal, Autoport, Turkey"s first purpose-built car terminal and built at a cost of about $40m in a joint venture with Mitsui, was scheduled to open in June.

?Car manufacturing is a large, efficient and fast growing industry in Turkey, given low labour costs and high-quality output. As a result, more factories are being established, boosting production even more. Around 60% of cars produced are for export. Car ownership per head of population in Turkey is low, which should further boost growth. Turkish car exports are expected to reach 1m in 2008,? says Mr Arkas.

?We are an agent for the Grimaldi Group, that has problems storing cars at port. Today, there are so many cars we even place them among containers. So we decided to build a terminal in Izmit Bay close to the manufacturing plants.

?It will have an initial capacity of 400,000 cars per year. When the development plan for the Izmit area is approved, we have space at the terminal to double capacity.?

Arkas is also persevering with its $200m Anatolia Project to connect Turkish ports ? through a combination of rail and intermodal connections ? with inland provinces in the Asian part of the country.

?The aim is to help the economic development of central Turkey through the use of hubs that are equipped to distribute cargoes. It"s a long project that involves the purchase, or lease, of rail connected land,? says Mr Arkas.

?We have founded our own rail company, Ar-Gu, and have bought 500 wagons. We expect the approval this year of a law that will allow private operators to run their own locomotives.?

?We have found customers, and are devising simulations of transit times and costs to compare with road transport, as no one has ever shipped domestic container traffic before,? says Mr Arkas.

Such firsts don"t scare him. ?I"m usually always the prototype for new systems,? he says.

This news is a total 1415 time has been read