Arkas continues to move ahead 07 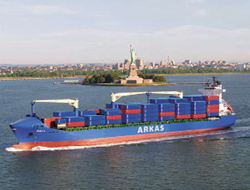 Arkas, which plans its future with long term strategies, achieved its goals for growth in 2007 while at the same time continuing its investments in vessels and the Anatolian Project.

Arkas continues to move ahead in 2007

Arkas, which plans its future with long term strategies, achieved its goals for growth in 2007 while at the same time continuing its investments in vessels and the Anatolian Project.

For the past five years, Turkey has maintained consistent growth through its economic policies and the country continued this growth trend in 2007, although it did not meet expectations. It is estimated that economic growth as of the end of the year will fall short of the goal of 5 percent. However, the fact that this percentage is below expectations does not overshadow the fact that growth has continued without interruption for 23 quarters. Although inflation figures did not meet the set goals and the Consumer Price Index finished out the year at 8.4 percent inflation, which was significantly higher than the goal of 4 percent, the country did manage to limit the increase to single digits. Turkey managed to achieve exports that were higher than its goal of 100 billion dollars. Turkey"s exports increased 23.49 percent, reaching 105.925 billion dollars, and the goal for 2008 was set at 125 billion dollars.

As these developments were occurring in the economy, Arkas kept moving forward in 2007 by continuing to invest in accordance with long term strategies. Arkas displayed strong performance throughout the year in every field in which it operates. After exceeding goals for growth in 2005 and 2006 by five percent, Arkas finished out 2007 with 20 percent growth. The primary factors in Arkas" growth performance in 2007 were the trust that customers have in Arkas as well as the company"s extensive investments in its Merchant Marine Fleet and the Arkas Anatolia Project.

One of the most significant initiatives in 2007 was the purchase of 1,000 temperature-controlled (reefer) containers by EMES in order to provide service to exporters who are experiencing difficulties shipping fresh fruit and vegetables to the Russian market. Orders were placed for 500 additional reefers to be delivered in 2008. In 2007, Arkas began to transport bulk loads in addition to its sea container shipping. Emes Bulk Shipping and Transport, founded last November, operates two 10,000 dwt vessels that transport products like ore, steel raw materials and products, pipe, cement and grain, which are a significant part of Turkey"s exports.

In 2007, Arkas continued developing the Arkas Anatolia Project, which was started in 2003 with the goal of making use of sea and rail transportation to reduce shipping costs and provide increased opportunities for industries in Anatolia. 2007 saw the completion of work related to procuring the necessary real estate in cities where plans are in place to offer services as part of the project. Construction work is in progress to design and build warehouses, distribution centers and similar buildings on these properties. A 6,500 square meter bonded and non-bonded warehouse has been constructed and put into operation in Kayseri, one of the provinces in Anatolia which is one of the leading provinces in Anatolia in terms of commerce.

As Arkas continued its initiatives in Anatolia, it also strengthened its overseas presence. In 2007, Arkas added new companies outside of Turkey. Now that new offices have opened in Novorossiysk, Russia and Alexandria, Egypt, the number of countries where Arkas is represented has increased to 9 and the number of overseas service points increased to 18. Arkas also has offices in Greece, Algeria, Spain, Romania, Georgia, Ukraine and Bulgaria. 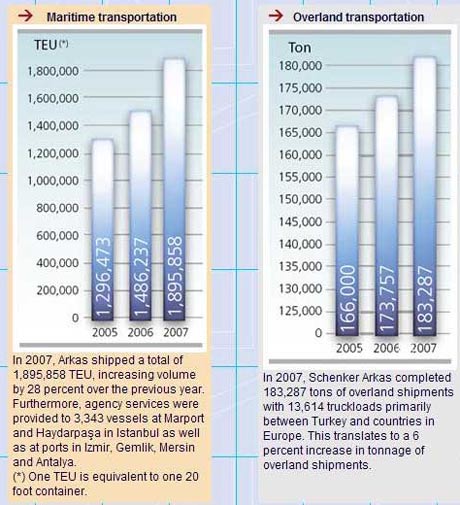 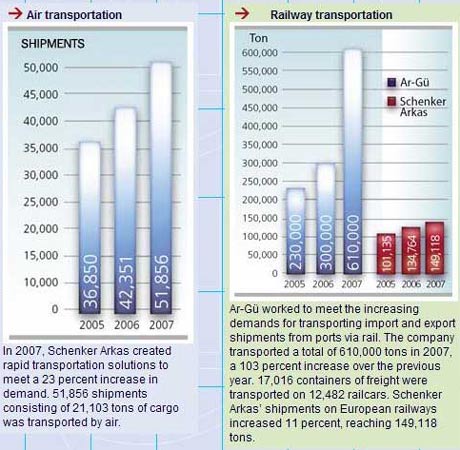 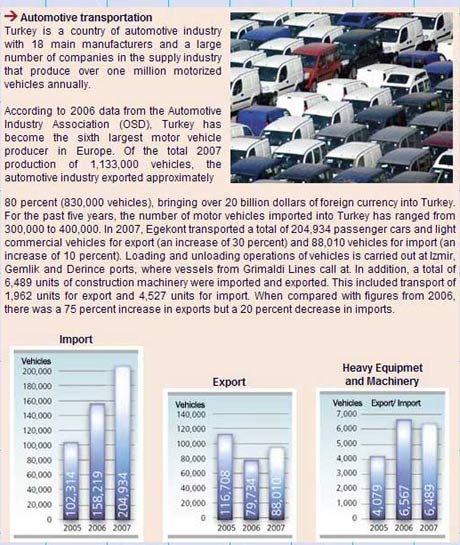 Arkas will bring to life a very important project in 2008 in the field of port operations. Arkas is partnering with the Japanese company Mitsui & Co. to open the first specialized port that will serve many different automobile brands.

Autoport was built on 16 hectares of land in Yeniköy, located in the Gölcük district of Kocaeli in the northeast Marmara region, a focal point for the automotive industry and a center for manufacturer and distributor warehousing. Equipped with two quays, 328 m and 246 m long, where two vessels can dock simultaneously, Autoport is capable of handling 400,000 vehicles per year.

Construction is almost complete on the port, which will provide dependable service to manufacturers and importers with an expert staff and advanced technology 24 hours a day, 7 days a week. 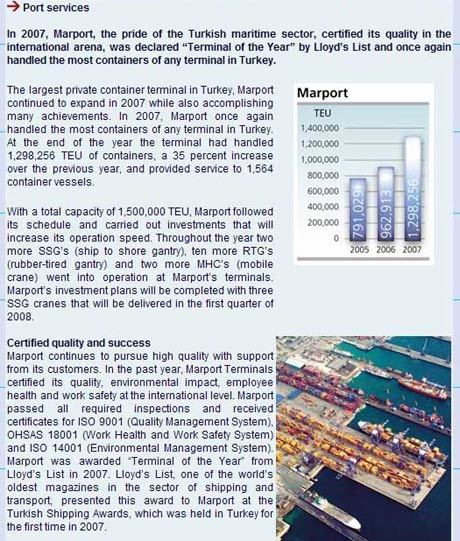 Last year Marport accomplished a first in the field of international transportation logistics in Turkey. TOC 2007 Europe, a conference on sea transportation, terminal and port operations held for the past 30 years in major European port cities, was hosted for the first time ever in Turkey on June 19-21.

This conference attracted leading industry representatives from around the world in the field of port operations and created a forum for communication where the Turkish market was highlighted and shipping in the Black Sea and eastern Mediterranean was discussed. 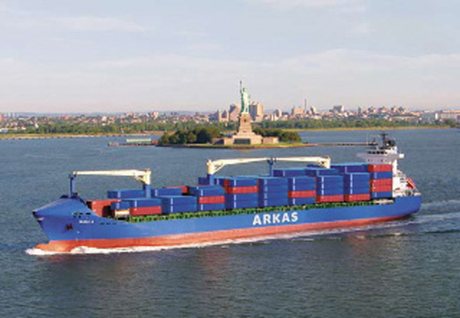 This news is a total 3480 time has been read