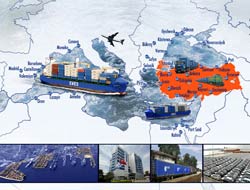 Last year Arkas increased its total assets to over 1.5 billion dollars with investments in the areas of trucking, railway shipments and warehouses, including Marport, Turkey"s largest container terminal.Arkas completed all of its basic investments in 2008 and increased the number of Turkish-flag vessels in its marine fleet to 25.

Arkas management thinks that companies must use their own resources as much as possible during economic crises and projects that external funds will shrink even further. In view of this, the decision was made to invest a total of 120 million Turkish Lira within the Arkas Holding corporate structure. With this increase in capital that was made with its own resources, Arkas plans to place itself in a position that will be advantageous when the markets open up again. Arkas increased the amount of funds invested in the 39 companies in its corporate structure by 8 percent over the previous year. Arkas plans to maintain this level in 2009 and also plans to reduce expenses during the economic crisis.

Arkas will continue investing in Anatolia

In order to encourage increased economic activity all over Turkey, Arkas started the Arkas Anatolia Project in 2003 by implementing combined transport via sea, land and rail. Through this project, Arkas will connect the nine largest commercial cities in Turkey (Izmir, Istanbul, Kayseri, Konya, Bursa, Ankara, Eski?ehir, Gaziantep and Mersin) to port cities by rail. Arkas Holding has increased the number of rail cars in the project to 501 and plans to build logistics centers in regions where all land purchases were completed in 2008. Izmit Köseköy and Adana Yenice are at the top of the list of logistics centers with rail connections that are slated for opening.

A foreign partner for the Anatolia Project

Due to the upheaval experienced in the financial markets, two firm offers regarding partnership in the Arkas Anatolia Project will be evaluated in 2009.

Besides the capital assets of the companies, Arkas will take into consideration experience in the sector and technical knowledge during these partnership negotiations.

This news is a total 7094 time has been read