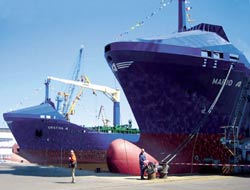 Arkas Holding has increased its fleet by adding the M/V CRISTINA A and M/V MARIO A, each with a capacity of 1,604 TEU.

Arkas Holding has increased its fleet by adding the M/V CRISTINA A and M/V MARIO A, each with a capacity of 1,604 TEU.

Arkas received delivery of the vessels at a ceremony held in the town of Wolgast, Germany. With eight new vessels which will be built by 2010, Arkas" total investment will reach 320 million dollars.

Arkas, took delivery of the vessels M/V CRISTINA A and M/V MARIO A at a ceremony held in the town of Wolgast, Germany. The vessels were built at the Peene Werft shipyard at a cost of 80 million dollars, and their capacity of 1,604 TEU (standard containers) makes them the largest vessels in Arkas" Fleet.

A fleet of 19 vessels flying the Turkish flag

As with the other 17 vessels in the Arkas fleet, the two new deliveries will also carry Turkish flags. The vessels are making their maiden voyage to Turkey in order to make a switch to the Turkish flag. The M/V CRISTINA A departed from Wolgast and arrived in Izmir in eight days. After Turkey, the vessel will sail to the U.S. east coast and to eastern European countries. The M/V MARIO A will make its maiden voyage in July.

The largest of their kind in Turkey, the two container vessels vessels have been fitted with 13,280 kW engines which can propel them at a top speed of 20 knots (37km).

Two more vessels to be delivered in October
In October, Arkas will receive delivery of two more vessels from the same shipyard. Arkas has ordered 18 vessels to date from the Peene-Werft Shipyard and plans to receive delivery of six more vessels from the same shipyard by 2010. The vessels that will be delivered in October will have the same specifications as the M/V CRISTINA A and the M/V MARIO A, which are the largest vessels ever to be built at Peene-Werft. Boasting an overall length of 184 meters, a 24.5 meter breadth and a capacity of 1,604 TEU, these two vessels will also fly Turkish flags.

At a ceremony with approximately one thousand guests Lucien Arkas said, “The M/V CRISTINA A and the M/V MARIO A are the largest vessels ever to be built in Wolgast. It is impossible to build larger vessels without deepening the Peene River. Since we began working with this shipyard in 1999, we have received delivery of 18 vessels at a cost of 500 million Euros. Germany has always invested in Turkey. Now we are investing in Germany.”

Left to right: Mr. Siegfried Crede, Member of the Board of Directors Detlef Hegemann AG, Lucien Arkas, Chairman of the Arkas Board of Directors, Bernard Arcas, Member of the Executive Board at Arkas Holding, Cristina Cosentino and Matilde De Zandonati, who named the vessels and Mr. Detlef Hegemann, President Hegemann Group of Companies.
www.TurkishMaritime.Com.tr
This news is a total 9570 time has been read