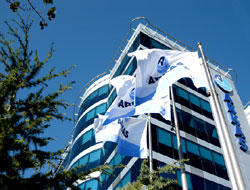 Arkas has expanded the size of its fleet to 25 with new vessels.

Arkas Holding has added two more vessels to its fleet, M/V Claire A and M/V Diane A, each with a capacity of 1,604 TEU. Now that it has expanded the size of its fleet to 25 with these new vessels, Arkas deliveries make up 57 percent of all container vessels in the Turkish Marine Fleet.

Arkas, has increased its transport capacity to 29,019 TEU and increased the number of Turkish-flag vessels it owns to 25 with the recent purchase of M/V Claire A and M/V Diane A. These new vessels were constructed in the Peene-Werft Shipyard in Wolgast, Germany, where a total of 14 vessels in the Arkas Marine Fleet have now been constructed.

Now that these two new vessels have been delivered, Arkas vessels make up 57 percent of all container vessels in the Turkish Marine Fleet. Arkas will increase the number of vessels in its fleet to 27 when it adds two more vessels which will be built in this same shipyard by 2009. The capacities of the vessels that have been delivered to Arkas by Peene-Werft since 2001 vary between 1,208 and 1,604 TEU.

Lucien Arkas, Chairman of Arkas, stated that the partnership with Peene-Werft Shipyard which began 10 years ago has turned into a friendship. He said, ?All of the vessels which we have had constructed up until now have had top quality and superb performance. We have not had any problems. We will receive delivery of two more vessels from this same shipyard in July of 2009. I am thankful to the ship engineers and everyone who worked on the construction. We have received delivery of the largest capacity ships Peene-Werft Shipyard has ever built. In 2006, we canceled the vessels which we were to receive in 2010 based on estimates of developments in the economy. Depending on the developments in the economy by next June, if we see a light at the end of the tunnel, we will be able to place more orders for container vessels in Turkey.?

A growing fleet of vessels that fly the Turkish flag

As with the other 23 vessels in the Arkas fleet, the two newest ships will also fly Turkish flags. After the vessels make their maiden voyage to Turkey and switch over to the Turkish flag, they will begin service in the Mediterranean and Black Seas. True to the Arkas tradition, the new vessels were named after Arkas family members. M/V Diane A and M/V Claire A are named after Arkas Holding Chairman Lucien Arkas" daughters.

SPECIFICATIONS OF THE CLAIRE A AND DIANE A

This news is a total 2460 time has been read