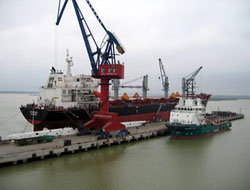 Armada (Singapore), an offshoot of Armada Shipping in Switzerland, is seeking to restructure its business.

Armada (Singapore), an offshoot of Armada Shipping in Switzerland, is seeking to restructure its business.

Major dry bulk shipping operator Armada (Singapore) has filed to protect its assets while it restructures in the face of charter party and freight contract defaults by third parties.

Armada (Singapore), an offshoot of Armada Shipping in Switzerland, is seeking to restructure its business under a Scheme of Arrangement under Section 210 of the Companies Act of Singapore.

The Scheme of Arrangement agreed by Singapore Courts on Tuesday gives Armada eight weeks in which to come up with a repayment plan to its creditors, for the creditors to agree to it and for this be then approved by the courts in Singapore. The company has also filed for a stay order in New York courts to prevent creditors taking action against it there while it restructures.

Armada (Singapore) managing director Tommy Rathleff stressed that it was taking the action in effort to preserve its business and name, and remain a going concern that will be able to meet its obligations to creditors, rather than simply shutting up shop.

?We have achieved the best possible solution during this global economic crisis to guarantee our return to financial health,? said Mr Rathleff. ?We expect to create a viable and sensible plan that will provide a fundamentally sound groundwork for our business activities on a long-term basis.?

?We can see a lot of unrealised profits in this company that will be gone if Armada no longer exists,? he told.

Armada (Singapore) has been hard hit by defaults from charterers running into hundreds of millions of dollars, including the well publicised default by Fortescue Metals Group. This claim is understood to be worth in the region of $200m over the duration of contracts to 2014. It has a similar default worth around $170m with an unnamed Indian charterer.

The Singapore company also has unrealised paper losses in the region of $60m to $70m.

Armada Singapore has filed a total of 12 suits in the New York courts over the last two months against a wide range of charterers.