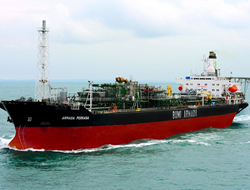 The contracts extension for the Armada Perkasa, which has been operating offshore Nigeria in the Okoro-Setu field, is estimated at approximately RM 221 million in total.

Mr Hassan Basma, Executive Director/Chief Executive Officer of Bumi Armada said, “Our Armada Perkasa, has been operating for Afren since 2008 with more than 98% uptime. These two-year  contract extensions by Afren are for the second and third optional extension years and underscore the quality of the asset and the operations and maintenance services provided by BAB Group.”

The Armada Perkasa, which is 211.2 m long and weighs 58,557 deadweight tonnes, has a production capacity of 27,000 bbls/day of liquids and storage capacity for 360,000 barrels. To date, the FPSO has lifted over 32 million barrels of oil.

The contracts extensions are expected to contribute positively to Bumi Armada’s revenue and earnings from 2014 through to 2016.

This news is a total 1376 time has been read