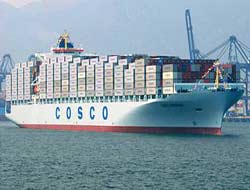 The Cosco general cargo ship An Yue Jiang is thought to be heading back to China with its cargo of arms that were destined for Zimbabwe's armed forces.

The Cosco general cargo ship An Yue Jiang is thought to be heading back to China with its cargo of arms that were destined for Zimbabwe's armed forces.

The International Transport Workers' Federation which has helped mobilise workers across Southern Africa to block the An Yue Jiang"s cargo of arms, has given a cautious welcome to indications by the Chinese Foreign Ministry that the ship is likely to return home without attempting to unload.

According to an AFP report Chinese foreign ministry spokeswoman Jiang Yu said: "To my knowledge, the Chinese company has decided to bring back the boat."

The news comes after the United States asked that China withdraw the weapons shipment destined for Zimbabwe and halt further arms shipments to the increasingly isolated African regime.

Ms Yu said: "The cargo was not unloaded because the Zimbabwe side failed to receive the goods as scheduled, so the Chinese company made the decision according to this situation,"

However, the London-head quartered global union federation noted that the Chinese government has again deferred the final decision to Cosco, the ship"s owners, and that the company has not yet made a definite announcement that the arms mission is being aborted. It did however welcome Cosco"s assurance to the ITF, received today, that Cosco "has been actively resolving this matter".

ITF General Secretary David Cockroft said: ?We hope that this will bring this affair to a close, and are ready, if appropriate, to stand down the international trade union operation to stop this deadly shipment reaching Zimbabwe.?

He continued: ?There"s a lesson here: that when governments refuse to do what they should, it"s in the power of ordinary people ? in the ITF, our member unions, the ITUC, the Southern Africa Litigation Centre and the churches ? to do what has to be done. We will draw on that experience if we learn that any further attempts are being made to hand Mugabe"s thugs the weapons they would doubtless use against the people of Zimbabwe.?

This news is a total 1941 time has been read