Artworks perished under the sea 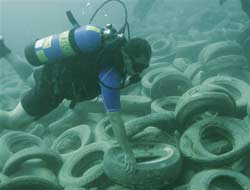 The port authority of Bodrum imposed a fine of YTL 1550 to a group of artists who organized an underwater exposition to highlight sea pollution, as the artists did not collect the artwork from the sea after their project.

The port authority of Bodrum imposed a fine of YTL 1550 to a group of artists who organized an underwater exposition to highlight sea pollution, as the artists did not collect the artwork from the sea after their project.

Denizi Pişirdik art group, "We Cooked the Sea" in English, organized an underwater ceramic exposition on the theme of recycling to draw attention to excessive consumption and environmental pollution. Under the framework of fourth Bodrum film festival last month, the ceramic artworks were presented around the two sunken war ships. But the artists did not collect the ceramics on time despite four warnings by the Bodrum port authority.

The exposition was prolonged in response to overwhelming interest, said İnci İyibaş, the spokesperson for the art group. She emphasized that it is impossible for the exposition to pollute the sea. ?On the contrary, the aim of the exposition was to leave those people who pollute the sea alone with their conscience 30 meters under the sea,? she said. The art group applied to other authorized institutions and made a complaint against the Bodrum port head Eray Aykanat, İyibaş said. Denizi Pişirdik group has been organizing underwater ceramic expositions since 2001.

Artworks perished under the sea

The exposition was prolonged without any permission, the port head Aykanat said. ?The artworks perished in the sea, and they started to create pollution,? he said. ?We imposed a fine, as they pollute the sea while trying to draw attention to pollution,? Aykanat said. He emphasized that the port authority tried to support the artists in all ways throughout the project and that the group ignored their repeated warnings.