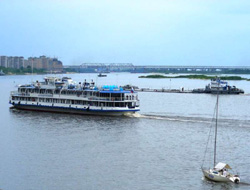 The traffic of ships in the Mediterranean is growing and the pollution danger is rising due to the increasingly high number of oil tankers: according to a study commissioned by the European Union.

The traffic of ships in the Mediterranean is growing and the pollution danger is rising due to the increasingly high number of oil tankers: according to a study commissioned by the European Union to Lloyd's Marine Intelligence Unit, the traffic of ships will grow by 23% in the next ten years and it will be mainly the oil tankers which will increase their activity.

The Mediterranean, already today one of the most used routes in the world with 15% of the global traffic of ships, will be crossed in 2018 by ever larger ships and ever more loaded with oil coming from the Black Sea and the Caspian Sea.

The average age of the ships which dock at the eastern Mediterranean port is much higher compared to that of the ships in the rest of the basin: in Limassol, Alexandria, Valletta and Mersin, the ship have an average 20 years of activities behind them, while in Algeciras, Augusta, Palma, Barcelona, Genoa, Fos and Gibraltar ships which have travelled on the average 14 years stop.

This makes the east of the Mediterranean basin the area most exposed to risks of incidents which cause environmental disasters.

The oil tankers which transport crude oil from the Caspian Sea to Europe, via the Black Sea and the Bosphorus Strait, transit in the east.

That traffic is bound to increase, warns the study commissioned by SAFEMED, the EuroMed Cooperation on Maritime Safety and Prevention of Pollution from Ships financed by the EU.

The oil export from the Black Sea continues now at an average of 100 million tonnes a year and, the experts say, is bound to increased engulfing the ports of the east. And soon, the study points out, the trip of the Iraqi oil, so far blocked, will also resume, which will put back to function the Turkish port of Ceyhan and various Syrian ports, further intensifying the traffic at risk.

New pressure will also come once the oil pipelines, currently under construction, such as Nabucco, are completed, which will make new tanker trips necessary.

The technicians explain that the Mediterranean is most of all a route of transit, at risk also because the ships which came from outside are much bigger than the ones which operate exclusively in the basin: in 2006 there were some 10,000 cargo ships that crossed the waters between the two coasts, with an average tonnage three times higher than that of the ships which never go beyond Gibraltar and Suez.

This news is a total 1152 time has been read