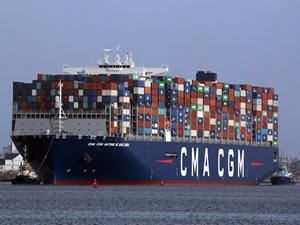 “Anecdotal evidence already points to de facto rate levels for some shipments of up to 10,000 USD/FFE on Asia-Europe and Transpacific,”

Spot rates published this afternoon by the Shanghai Containerized Freight Index (SCFI) show prices to move goods from Asia to Europe are soaring even further, with one container shipping expert suggesting the all-in rate for forty foot boxes on the trade lane may have breached the $10,000 mark this week.

SCFI data show spot rates on the Asia-North Europe tradelane leapt 24.2% this week to $2,948 per teu, and climbed by 28.9% on the Asia-Mediterranean route to sit at $3,073 per teu. In the last 10 weeks, rates to North Europe and the Mediterranean have jumped by more than 150%.

Rates on almost all tradelanes have leapt in recent months with the cost and difficulties of shipping products making regular mainstream media headlines and getting regulators around the world to investigate the soaring prices. The strong bull run is also expected to play into liners’ hands when contract negotiations restart next year.

On LinkedIn, one of the world’s most respected container analysts, Lars Jensen from SeaIntelligence Consulting, suggested today that the SCFI is in some cases significantly underestimating the actual rates paid as there are additional fees related to equipment and space availability.

“Anecdotal evidence already points to de facto rate levels for some shipments of up to 10,000 USD/FFE on Asia-Europe and Transpacific,” Jensen wrote.

With regulators looking on closely, container shipping’s chief lobby group yesterday sought to suggest there was little liners could do to allay the supply chain difficulties experienced in recent months.

In a release entitled ‘Assessing the COVID Cargo Crunch’, the Washington DC-based World Shipping Council stated: “No one could have planned for the type of surges that are stressing the container transportation network today, because the demand swings are unlike anything ever seen.”

Facing criticism for not being able to supply enough containers to exporters, the lobby group countered: “Now is not the time to introduce dramatic change to the systems or processes. The challenge for all parties is to find ways to make the current system work better. This requires constant communication between service providers and shippers, and ocean carriers recognize the part they must play in that. It also means avoiding practices that only make the situation worse, such as making phantom bookings or skipping terminal appointments or holding on to loaded containers as a storage solution. The system will return to better equilibrium, and we must collectively do a better job of managing it through the crunch period.”

Container shipping – and specifically its alliances structure – is expected to come under far greater scrutiny in the next few months.

This news is a total 1445 time has been read
Tags: Asia-North Europe tradelane, Container shipping, SCFI