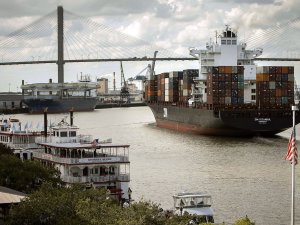 A recovering U.S. economy and stronger dollar have spurred imports from Asia.

A recovering U.S. economy and stronger dollar have spurred imports from Asia. While that should benefit the California ports of Los Angeles and Long Beach, a protracted labor dispute there is directing cargo to East Coast rivals.

Seven months of contract negotiations between employers and the union representing 20,000 longshoremen at 29 Pacific ports have exacerbated delays along a critical freight route that handles about half of all U.S. imports. A West Coast lockout in 2002 cost the U.S. economy an estimated $1 billion a day. The lesson from 12 years ago is be prepared to switch up sea lanes.

“Port-diversification strategies are becoming more prevalent: You don’t import all your eggs into one basket,” said Richard Thompson, a managing director and head of supply chain & logistics solutions for JLL Research in Chicago.

When labor talks bogged down in November, total imports into the Port of Los Angeles fell 4.3 percent, the third monthly drop this year. That contrasts with an 11.5 percent increase in New York and a 16.2 percent rise in Georgia’s Port of Savannah last month.

Express Inc. (EXPR), a U.S. retailer catering to millennials, anticipated the port troubles along the West Coast and took pre-emptive steps, acting “early and proactively to divert product primarily to the East Coast,” President David Kornberg said in a Dec. 4 conference call discussing third-quarter earnings. “It was the right thing to do.”

Chico’s FAS Inc. (CHS) said on a Nov. 25 earnings call it also diverted clothing stock to the East Coast and piled orders on planes to meet deadlines. Even so, FedEx Corp. warned on a Dec. 17 conference call that some U.S. consumers shouldn’t expect Father Christmas to be on time this year.

The average pace of growth this year for all imports to New York and Savannah was twice that of Los Angeles and Long Beach, their two biggest competitors on the West Coast, according to Datamyne data compiled by Bloomberg. The volume of North America-bound cargo from Asia, meanwhile, is near the highest since at least 2011.

Build & Imagine, a toy startup based in Oakland, California, had a container leaving Oct. 20 from China heading to Los Angeles for a trip that should have taken three weeks. Instead it took six for the container to reach the company’s warehouse because of delays at the port. Build & Imagine paid $950 in storage fees because it couldn’t collect the container and didn’t have any stock to sell customers until after Black Friday, the unofficial start of the holiday shopping season.

“We had some stores cancel on us; we had some reduce the quantities they wanted,” Sarah Newman, the company’s director of operations, said in a phone interview. “You got the impression that the port really didn’t care — especially at the point where they started charging us storage fees for not being able to get our container.”

FedEx Chief Executive Officer Fred Smith warned the delays would be news in January when retailers release their results for the holiday quarter.

“The slowdown in the West Coast ports has been a much bigger deal than people think,” he said on the Dec. 17 call.

Those ports still lead other U.S. destinations in market share, with 43.5 percent of total U.S. cargo volume, according to the latest figures in the 2013 annual report of the Pacific Maritime Association.

“L.A. and Long Beach will still be predominant,” said Lee Klaskow, senior analyst at Bloomberg Intelligence in Skillman, New Jersey. “But we are seeing these trends that could motivate some retailers to think differently about their supply.”

A shift would mesh with the reality that two-thirds of the U.S. population is east of the Mississippi River, according to Klaskow. Another consideration is the increasing use of the Suez Canal — connecting the Mediterranean Sea and the Red Sea through Egypt — as a trade artery for the U.S.

Much of the East Coast gain can be traced to vessels from Asia increasingly relying on the canal, according to JLL Research, which didn’t identify specific countries of origin.
That paves the way for relative newcomers. With a population of just 143,000, the port of Savannah has emerged as a major trade hub, ranking No. 4 nationally, according to Datamyne data. Once a sleepy Southern outpost, Savannah has been the fastest-accelerating major U.S. harbor for most of the last decade with an average annual growth rate of 11 percent.

“Business is being lost,” the Pacific Maritime Association said in a Dec. 17 statement. It represents shipping companies, stevedores and terminal operators at the 29 West Coast ports and has been in negotiations with the union since May. The two sides remained “far apart” on several issues, the association said in the statement.

The slowdowns have exacerbated congestion from equipment shortages and rail delays that increased the number of ships waiting to load and unload.

“We are concerned that the damage is permanent and shippers will be fearful to put their trust in the West Coast ports going forward,” the association said in its statement.
Union spokesman Craig Merrilees countered in an e-mail statement that shipping management is scapegoating unionized dockworkers for backups at the ports when management practices are more at fault.

The West Coast woes have attracted the attention of policy makers in Washington. In a Dec. 10 letter to President Barack Obama, House Transportation and Infrastructure Committee Chairman Bill Shuster, a Pennsylvania Republican, wrote that the “mere threat of a shutdown has already forced importers and exporters to consider contingency plans, which may include re-routing cargo through Canadian or Mexican ports.”

With countries elsewhere struggling, the world economy is once again relying on the U.S. consumer to keep growth ticking. Bolstered by a plunge in gasoline prices and a brightening job outlook, American shoppers so far are delivering. Retail sales increased in November by the most in eight months, while employers stepped up hiring and offered workers more pay.

Almost 20 percent of all U.S. imports come from China, whose biggest exports are electronics, machinery, furniture and toys. Japan and South Korea together accounted for almost 10 percent of U.S. imports last year.

Apparel retailer The Children’s Place Inc. (PLCE) “made the strategic decision back in Q1 to route all of our goods to the East Coast as we anticipated potential disruption at the West Coast,” Michael Scarpa, chief operating officer, said in a Nov. 20 earnings call.

This has meant “basically zero impact to date” from the disruption, and “our thoughts as we move forward is to continue to route our goods to the East Coast until we see a resolution happen.”