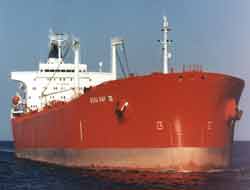 Asian aframax charter rates may decline, after rising the least in four days, as the Lunar New Year holidays will slow hiring of tankers.

Asian aframax charter rates may decline, after rising the least in four days, as the Lunar New Year holidays will slow hiring of tankers.

The rate to transport 80,000 tonnes on an aframax from Kuwait to Singapore increased 0.2 per cent to Worldscale 144.17 on Tuesday, according to the London-based Baltic Exchange. It gained 2.5 per cent last week. Shipping a tonne of fuel on the route costs US$14.46, based on data compiled by Bloomberg.

Aframax rates on the Middle East-Singapore route rose last week, the first time this year, as companies rushed to hire tankers ahead of the Lunar New Year holidays, which run from Feb 6 to Feb 12 this year. Rates of smaller tankers may track the decline in demand for supertankers. 'The Chinese New Year is affecting trading, so this week and next, the market may be quiet,' Takeshi Ando, a shipbroker at Matsui & Co's tanker team in Tokyo, said by phone yesterday. 'We saw some Chinese charterers working on fixtures yesterday and the other day as they probably wanted to fix them before the holidays.' Charter rates for supertankers, which can carry two million barrels of oil, on the benchmark Middle East-Japan route fell the past two days, losing 4 per cent, after a 57 per cent surge in the last week, according to data on the Baltic Exchange.

'This week is likely to see slower spot demand as Chinese, South Korean and Taiwanese traders will most likely be away on holidays,' Henrik With and Glenn Lodden, Oslo-based analysts at DnB NOR Markets, said in a report released on Tuesday.

Only one aframax, capable of moving 104,493 tonnes of cargo, is so far scheduled to arrive in Singapore in the next two weeks, according to Bloomberg data. That compares with six aframaxes with a combined capacity of 623,802 tonnes that were scheduled to arrive this week, the data showed.

The following is a table of rates to charter smaller tankers capable of carrying less than one million barrels of crude oil or oil products on Asian routes as of Feb 5, according to the Baltic Exchange.

This news is a total 834 time has been read