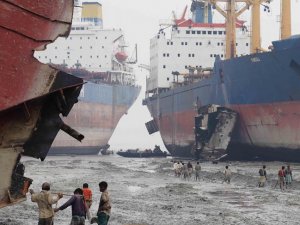 European, Turkish and Chinese recyclers are set to benefit from strict new EU rules on breaking up old ships, but the practice of dismantling them on beaches in South Asia at great human and environmental cost will still be hard to stop.

Of all 1,026 ocean going ships recycled in 2014, 641 were taken apart on beaches in India, Bangladesh and Pakistan, according to figures of the NGO Shipbreaking platform, which campaigns for an end to hazardous scrapping on beaches.
In South Asia, tankers, cruise liners and other old ships are rammed onto a beach, with hundreds of unskilled workers then taking apart the vessels with simple tools such as blowtorches. Chemicals leak into the ocean when the tide comes in.
There is also a human cost. The Tata Institute of Social Sciences in Mumbai estimates that some 470 workers have died in the past 20 years in accidents in Alang-Sosiya, the world’s largest set of ship-breaking beaches in Gujarat.
Some 35,000 mostly migrant and unskilled workers operate there.
However, a new European Union law requires EU registered ships be recycled at sustainable facilities, with a list of compliant yards likely due in 2016.
The EU law will be the first large-scale implementation of the International Maritime Organisation’s 2009 Hong-Kong Convention on ship recycling, which has only been ratified by three countries – Congo Republic, France and Norway.
“I agree that we need to stop the shameful practice of European ships being dismantled on beaches,” said Karmenu Vella, European Commissioner for the Environment and Maritime Affairs.
The EU list is most likely to contain yards in the European Union, China, Turkey and North America. South Asian facilities are expected to be absent.
“The European list will split the market into a safe market and a substandard market,” said Patrizia Heidegger of the NGO Shipbreaking Platform.
LOW STANDARDS MEAN HIGH PROFITS
The incentives to part with an old vessel at a South Asian facility is huge. There, rules on disposing of asbestos for example are generally more lax, meaning the profits for breaking up a ship are higher.
Depending on raw material prices, ship owners can make up to $500 per tonne of steel from an Indian yard, compared with $300 in China. In Europe it is only $150.
To counter this, the European Commission is also looking at ways to reward ship owners for recycling their ships at approved facilities, although details are still to be decided.
Indian shipyard owners are not impressed by the European rules, arguing they are designed only to fill empty yards in Europe. Fewer than 4 percent of all retired ocean-going ships passed through European facilities in 2014.
Haiderali G. Meghani, director of International Steel Corporation, a large ship recycling firm based in Alang, said concerns about poor safety and environmental standards in India were misplaced.
“We are almost near to European standards,” he said.
The European regulation has one big loophole, as ship owners can change the flag of their ships or sell it on to a third party outside Europe which then scraps the ship at a non-approved facility.
Despite this, the EU should serve to shame ship owners who still dismantle their ships in hazardous ways.
European shipping groups such as Maersk and Hapag Lloyd have already put ship recycling policies in place, saying they would only recycle their ships at facilities which followed international environmental standards.
At Europe’s largest ship recycling plant in Ghent, Belgium, the volume of ships recycled has more than quadrupled over the past 10 years to about 35,000 tonnes of steel per year.
Only about 30 workers are employed at the yard, most of the heavy work done by machines. European groups such as Maersk and CGG have sent ships to be recycled there.
“Large companies have started to come here, they just can’t afford the bad press anymore of dismantling ships on some beach,” said Peter Wyntin, head of recycling at the Galloo ship recycling yard in Ghent said.