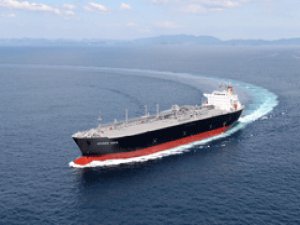 The LPG carrier on order is the fourth sister ship identical to vessel first ordered at MHI by Astomos Energy in 2013.

The order has been placed through NYK-linked Kyoei Tanker. The ship will then be chartered out by NYK to Astomos for a five-year period.

The order newly placed with MHI is an integral part of Astomos Energy’s plan to expand its LPG transport structure and increase gross LPG handling volume. Namely, the company aims to increase its LPG handling volume from the current 10 million tons per year (mtpy) to more than 12mtpy by 2017.

The energy-efficient 83,000 m3 carrier, set for delivery in the first half of 2017, will be suited for passage through the newly expanding Panama Canal.

In addition, ‘K-Line” has ordered an 82,200 cbm VLGC carrier at Kawasaki Heavy Industries, with the delivery set for 2017. This newbuild LPG carrier is also going to be chartered out to Astomos, K Line said, without disclosing the amount of the fixture.

Astomos Energy presently operates a fleet of 21 large-scale LPG carriers. All six vessels owned by the company and 10 of the company’s 15 time-chartered vessels were built by MHI at the Nagasaki Shipyard.