At the threshold of calamity

The largest dam in Iraq is at risk of an imminent collapse that could unleash a 20 meter wave of water on Mosul, a city of 1.7 million people, the US has warned.

Iraqi dam 'at risk of collapse'

The largest dam in Iraq is at risk of an imminent collapse that could unleash a 20 meter wave of water on Mosul, a city of 1.7 million people, the US has warned.

In May, the US told Iraqi authorities to make Mosul Dam a national priority, as a catastrophic failure would result in a "significant loss of life".

However, a $27m reconstruction project to help shore up the dam has made little or no progress.

Iraq says it is reducing the risk and insists there is no cause for alarm.

However, a US watchdog said reconstruction of the dam had been plagued by mismanagement and potential fraud.

In a report published on Tuesday, the Special Inspector General for Iraq Reconstruction (SIGIR) said US-funded "short-term solutions" had yet to significantly solve the dam's problems.

SIGIR found multiple failures in several of the 21 contracts awarded to repair the dam.

Among the faults were faulty construction and delivery of improper parts, as well as projects which were not completed despite full payments having been made. 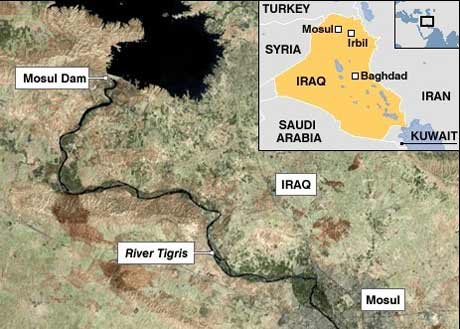 The dam has been a problem for Iraqi engineers since it was constructed in 1984. It was built on water-soluble gypsum, which caused seepage within months of its completion and led investigators to describe the site as "fundamentally flawed".

In September 2006, the US Army Corps of Engineers determined that the dam, 45 miles upstream of Mosul on the River Tigris, presented an unacceptable risk.

Iraqi authorities, however, say they are taking steps to reduce the risk and they do not believe there is cause for alarm.

The Iraqi Minister for Water Resources, Latif Rashid, told the BBC that a number of steps were being taken to tackle the problem, including a reduction in water levels in the reservoir and a round-the-clock operation to pump grouting into the dam's foundations.

Work would also begin next year on a longer-term plan to make the foundations safe by encasing them in a concrete curtain, he added.

This news is a total 683 time has been read