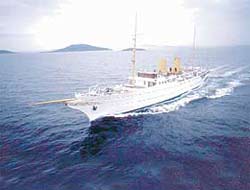 The Savarona, refurbished and used as state yacht by Atatürk, was built in 1931 as the largest private yacht ever constructed at the time, for a wealthy American woman, Emily Roebling Cadwallader.

The year was 1938. Germany had invaded Austria and declared its support for Japan's policy of ridding Asia of colonialism and communism. America was becoming aware that it needed a navy that could fight on two seas. Meanwhile in Turkey, the information that the country's president, Mustafa Kemal Atatürk, was seriously and possibly fatally ill was being kept from the general public.

Atatürk had had the use of the ship Ertu?rul but it had proved not very seaworthy in rough weather. A story goes that he had taken British King Edward II for a tour in 1936 and the soot from the funnel had ruined the royal white flannel pantaloons. Although one can imagine that the king had more than one white trouser, undoubtedly there was great chagrin all around. One wouldn't have wanted to be the king's valet either. The king's reaction seems not to have been recorded.

Atatürk ordered that the Ertu?rul be scrapped, resulting in a search for a replacement to serve as the state yacht. When he saw the plans for the Savarona, named after an African swan, he liked the yacht very much and so its purchase was decided on. That March, the Turkish government purchased the Savarona for Atatürk's private use and he moved on to the ship after it arrived two months later from Britain and had been refurbished. He spent his time mostly resting in bed but when necessary holding cabinet meetings next to it. One source quotes him as saying, “I waited for this yacht like a child waiting for his toy. Is she going to be my grave?”

On September 5, Atatürk's condition took a turn for the worse and he was placed in an armchair and taken to a bedroom in Dolmabahçe Palace where he died on November 10, 1938. The Savarona, on which he had stayed for only six weeks, remained at anchor in the waters outside the palace where he could easily have seen it.

History of the Savarona

The Savarona that Atatürk approved of was originally built in 1931 for a wealthy American woman, Emily Roebling Cadwallader. It was the largest private yacht ever constructed at the time, and this seems to have been her only claim to fame. [She's lost that claim though because today it's only the fourth largest and by the time this article is read, it may have slipped even further down the list.] She was, however, also the granddaughter of John Roebling, who designed the Brooklyn Bridge. It was Emily who actually supervised the construction of the bridge after his son fell ill.

The ship, designed by naval architect William Francis Gibbs, was built for $4 million, an enormous amount of money in 1931 (equivalent of $53 million today), in Hamburg, Germany, and never sailed to the U.S. because of the threat of such a high import duty that it likely would have been confiscated. In other words, someone didn't do his or her homework when she was placing the order for the yacht. So Cadwallader sailed in the Mediterranean and to South Africa before deciding to sell it for a real bargain at $1.2 million in 1938, by which time the signs of the impending war in Europe were clear.

Following Atatürk's death, the Savarona was neglected and then turned into a training ship for the Turkish navy. The interior was changed to accommodate this new purpose, but eventually the decision was taken in 1989 to scrap the yacht. For many years, and especially on the anniversary of Atatürk's death, the ship would be anchored in front of Dolmabahçe Palace where it would be the focus of all eyes thanks to its length and graceful lines. The decision to get rid of it led to an outcry, and eventually Kahraman Sad?ko?lu stepped in and leased the Savarona for 49 years.

The refitting cost a reported $25 million and took a team of 425 workers three years to complete the job. The world-renowned interior decorator, Donald Starkey, was hired and put his considerable talents to work. Starkey's reputation particularly rests on his work on mega yachts, as they are now called. Finally, the yacht was ready, boasting 260 tons of marble, a huge grand staircase, modern engines and many other amenities. Atatürk's suite has been preserved as a museum and no one is permitted to use it regardless of how much money they might offer.

This classically built yacht is not just beautiful to look at, it is also tremendous to sail on. Today, most of its voyages are around the Turkish coast in the Mediterranean and Aegean. Four separate itineraries that are repeated five times over the summer sail from Istanbul to Bodrum and from Bodrum to Antalya and then in reverse. Each voyage takes seven days. Food and beverages, water sports, bathing in a Turkish bath, fitness, movies and tours to historic sites on land are offered to passengers at no extra cost or expense.

The Savarona in numbers

This news is a total 1137 time has been read