Attacks in Nigeria to increase 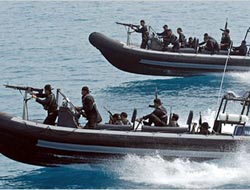 Attacks on vessels off the Nigerian coast are going unreported and could exceed those occurring off the coast of Somalia.

Attacks on vessels off the Nigerian coast are going unreported and could exceed those occurring off the coast of Somalia.

Attacks on vessels off the Nigerian coast are going unreported and could exceed those occurring off the coast of Somalia and in the Gulf of Aden, International Maritime Bureau divisional director Michael Howlett has warned.

While there were 40 attacks reported in Nigerian waters in 2008, Mr Howlett said the actual figure was closer to 150 or 200. ?We need owners to come forward,? he told a London Metropolitan University seminar.

However, he said, compiling accurate statistics was difficult in view of the varying nature of the attacks, which could involve armed robbery or guerilla actions as well as piracy.

Armed robbery incidents in themselves could vary from robbers boarding with knives or which highly sophisticated weapons.

Those incidents which occurred in national waters would be defined as armed robbery, while those on the high seas could be termed as piracy and it was important not to mix the two sets of statistics.

He said there had been a reluctance on the part of masters to report attacks in territorial waters because of the considerable delays that could be caused as a result of a subsequent inquiry by the authorities.

?One should be aware that some of these activities are carried out by militants,? he said. These included guerilla groups like the Movement for the Emancipation of the Niger Delta.

As of Wednesday night there had been 48 attacks in the Gulf of Aden and off the coast of Somali reported since the start of the year. Five vessels were hijacked, 102 crew members taken hostage and a further 24 vessels fired upon, Mr Howlett said. Seven ships and 118 crew were still in detention.

The number of vessels that have actually been hijacked had been steadily dropping because of the increased presence of naval forces patrolling in the gulf.

While in October last year the ratio of attacks to hijacks was one in three, this ratio had dropped to one in 19 by this month. ?The naval presence is working, but if you take the ships away then the problem will come back,? he said.

Mr Howlett warned against complacency in dealing with the problem of attacks on shipping. Foreign navies represented the ?only effective response? and ?robust targeting of motherships? was needed, as these vessels widened the range of the pirates to many hundreds of miles offshore.

With 11 ships released from detention since January 1, 2009 there were ?plenty of empty spaces in the car park? and attacks were likely to continue, he said.

This news is a total 803 time has been read