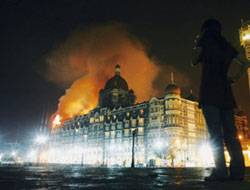 The terrorists behind the Mumbai attacks reached their destination by boat and started their killing spree at sea--raising troubling questions about Indian maritime security.

The terrorists behind the Mumbai attacks reached their destination by boat and started their killing spree at sea--raising troubling questions about Indian maritime security.

Intelligence officials are gathering vital data from a Thuraya system satellite phone recovered from a fishing trawler, the Kuber, found drifting 6-7 miles off the Mumbai coast on November 27.

According to some reports the Kuber was hijacked. According to another, at least one crew member was part of the plot. Four crew members are missing. The owners of the boat are being questioned. The boat's captain, Amar Narayan, "was killed in a brutal manner by the terrorists. They tied his limbs and put a band around his eyes and then knifed his neck," the Times of India quotes a Coast Guard officer as saying.

Prior to boarding the fishing vessel the 10 terrorists sailed from Azizabad in Karachi on November 23. on a small ship. They were picked up by a Pakistani vessel, Al-Husseini, (and not MV Alpha as reported earlier) which was stationed about 150-200 nautical miles off the Karachi port."

After entering Indian territorial waters, the terrorists transferred to the Kuber.

Kuber is believed to be the mother boat used to launch the inflatable dinghies which carried the terrorists to the seafront at Colaba.

This news is a total 674 time has been read