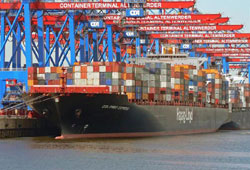 Co-ordinated approach to dealing with the crisis in the shipping industry is asked for.

A coordinated approach must be created against crisis rather that allowing market forces to take their course.

Senior figures in the maritime industry are calling for a co-ordinated approach to dealing with the crisis in the shipping industry rather than allowing market forces slowly to take their course.

Clarkson Research Services" managing director Martin Stopford said the industry should attempt to limit the supply of ships which were scheduled to flood the market in the next few years.

He warned that when market forces were allowed to deal with the shipping depression that took root in the early 1970s it took 18 years to resolve.

Speaking in London at the City of London Biennial Meeting, organised by the City University and its Cass Business School, Dr Stopford said: ?Are we going to leave this to market forces? The industry cannot influence demand but it should make a serious effort to manage supply.?

Dr Stopford"s remarks were echoed by ship financier Mark Long, HSBC"s global head of shipping, who said the industry should seek a long-term solution to its ills.

Mr Long said a ?large? part of the order book would disappear, but ?enlightened self-interest? should still prevail between shipyards, shipping companies, and financiers.

The order-book needed to be pushed back until the global economic recovery was there to meet it, he said.

Dr Stopford said the shipping industry had experienced an ?investment bubble? and that 2007 was ?a year too far?.

Illustrating this point, he cited the enormous growth in the newbuilding order book.

The world cargo fleet now stood at 1.1bn dwt while ships on order stood at 601.8m dwt, representing more than half of the existing fleet.

At the beginning of the shipping boom, the order-book represented 15% of the fleet.

?We are just coming to the end of the best years in shipping history,? he said.

Mr Long said a ?global economic recession? was now hitting the industry at a time when ship deliveries were reaching an all-time high.

Record volumes and record prices were colliding with slowing demand.

?For the first time in a decade, shipping companies are looking at deteriorating asset values and performance,? Mr Long said.

The higher cost of capital facing banks and their need to reduce leverage would affect corporate access to debt, including the shipping industry.

This news is a total 783 time has been read