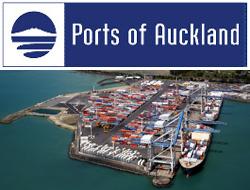 Ports of Auckland has confirmed 28 staff will lose their jobs as part of a major restructure of its container wharves.

Ports of Auckland has confirmed 28 staff will lose their jobs as part of a major restructure of its container wharves. The port's initial proposal, released last month, had suggested an overall reduction in staff numbers of 30 , out of a total of 202 who work in the affected parts of the business.

From July the port will berth the majority of visiting container ships at its newly expanded Fergusson terminal, and base all stevedoring staff there.

Previously ship visits and stevedoring staff were split between the Fergusson and Bledisloe container wharves.

"This is about steering the company through the current economic downturn, using our berths, land, equipment and labour as efficiently as possible, reducing cost and further lifting productivity."

Madsen said the changes would remove unnecessary duplication of overheads and infrastructure and further improve the port's ability to resource customer demand at peak periods.

"Under this new operating model we will be a leaner company, better positioned to capture sustainable growth once the recession is over," Madsen added.

The port's Bledisloe terminal will continue to be used for port operations, including containers, break-bulk and customs activities.

In March Ports of Auckland posted a 26 percent drop in half-year profit to $9.3 million despite recording record high container volumes.

Auckland Regional Council, chairman Mike Lee blamed rivalry with Port of Tauranga over business from international shipping lines for cutting margins to "anorexic" levels. Ports of Auckland is owned by the ARC.

However, in February Port of Tauranga recorded a 10 percent rise in half-year profit to $22.54 million.
Ports of Auckland said it would be consulting with staff and unions to discuss the impending redundancies over the next six weeks.

This news is a total 2102 time has been read