has signed a contract worth about Australian $106 million (US $76 million) to design and build a 107 metre vehicle-passenger catamaran.

Austal has signed a contract worth about Australian $106 million (US $76 million) to design and build a 107 metre vehicle-passenger catamaran.

Austal has received its second large vehicle ferry order within a week. It has signed a contract worth about Australian $106 million (US $76 million) to design and build a 107 metre vehicle-passenger catamaran for Maltese operator Virtu Ferries.

The order follows last week's announcement of a contract with Denmark's Nordic Ferry Services to build Austal's largest ever catamaran.

The Virtu Ferries' vessel is scheduled for delivery by mid 2010 and will be built by Austal's Western Australian workforce.

Intended for operation between Malta and Italy, the vessel will join Virtu Ferries' existing 68 meter vehicle ferry "Maria Dolores" which was delivered by Austal in 2006.

Virtu Ferries invited a number of high speed ferry builders to submit vessel options that would enable it to further expand its ferry service to Italy. Through continual communication with the client, Austal was able to utilize its in-house design team and experience to develop a highly customized vessel design that met all Virtu's requirements for the route.

"Similar to the recent Nordic Ferry Services order, Austal was able to draw on its in-house design capability and experience from more than 20-years of commercial ferry manufacture to offer a solution suited to the proposed operation," said Austal managing director Bob Browning.

"Following a long and rigorous selection process, we found the Austal 107 to be the best vessel for the route due to her versatility, speed and all round efficiency, as well as being tailor-made for the route's requirements," Mr Portelli said.

Designed to carry 800 passengers and 230 cars at a speed of approximately 39 knots, the vessel will be Austal's 24th commercial delivery to operators in the Mediterranean region, which includes 14 large vehicle-passenger ferries.

"This vessel will assist Virtu in providing a year round scheduled service for Maltese industry while also meeting the increased passenger demand generated from Malta joining the EU in 2004," he said.

The vehicle deck has the capacity to carry up to 230 cars or 45 cars and 342 truck lane meters, enabling Virtu Ferries to efficiently service the needs of private passengers with cars and campers, commercial tourist operators and trucking companies.

Vehicle loading and unloading will utilize ramps installed on both the stern and port-side.

Seating for the ferry's 800 passengers will be spread over two decks, each offering a passenger-friendly seating density of 2-3 seats per row, as well as a dedicated upper deck lounge area overlooking the vessel's bow.

Outdoor seating will also be available for more than 110 passengers.

The vessel will be built in accordance with the requirements and under the survey of Det Norske Veritas, conforming to International Maritime Organisation HSC Codes and Malta Flag State and Italian Port State Regulations. Registration will be under the Malta Flag. 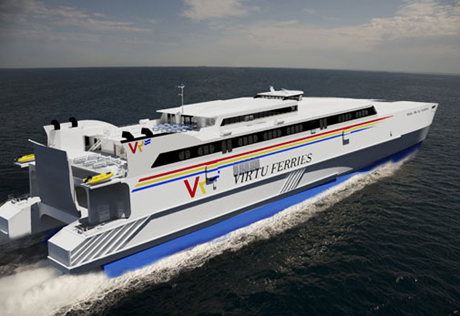 This news is a total 3026 time has been read