Austal to Build a New Catamaran for Molslinjen 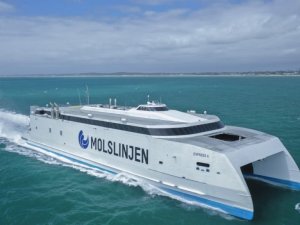 Australian shipbuilding company Austal has received an EUR 83.65 million (USD 92.8 million) contract for the design and construction of a new 115-metre high-speed catamaran for Denmark’s Molslinjen.

The new Auto Express 115, which is a follow-up order to the 109-metre high-speed catamaran Express 4 that joined Molslinjen in January 2019, will be the largest ferry ever built by Austal in terms of volume.

To feature a new generation of medium speed engines that are LNG compatible, the unit is designed with the potential to upgrade to LNG fuel in the future.

Austal said that the construction would start in the third quarter of 2020, while the delivery of the vessel is scheduled for the first quarter of 2022.

The catamaran will be designed in Henderson over a 12-month period and then built at Austal’s shipbuilding facility in Balamban in the Philippines. The unit would feature Austal’s signature raked-bow and optimised hull form, and an LNG-capable medium-speed power plant that offers a powerful, economical and environmentally-friendly solution, the shipbuilder noted.

With capacity for 1,610 passengers, space for 450 cars over 2 vehicle decks and an operating service speed close to 37 knots, the new ship is expected to serve Molslinjen’s Bornholm route between Ystad and Rønne, starting from early 2022.

This news is a total 333 time has been read
Tags: Austal, Catamaran, Molslinjen