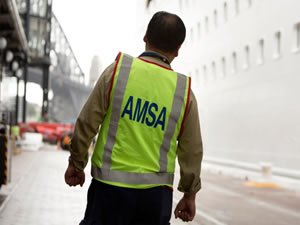 Japanese-owned car import vessel Metis Leader has been arrested in Australia on the grounds of overdue crew changes.

The International Transport Workers’ Federation (ITF) said a number of seafarers on the Panamanian-flagged vessel had been working aboard the vessel in excess of the 11 months, the maximum permitted under the Maritime Labour Convention (MLC) and vessels flagged to Panama.

“All workers have a right to stop working upon completion of the contracts the initially signed up for. To deny any seafarer the ability to get off a ship and go home to their families, means that they are forced to keep working.

What has happened here could give rise to a situation of forced labour,” ITF Assistant Coordinator for Australia, Matt Purcell, said. Purcell said the ship owner’s agents, Japanese manning companies World Marine Company and WSS Shipping Agencies, attempted to stop union inspectors from coming aboard to inspect the welfare of the crew. He added that the ship owner’s agents tried to use Covid-19 as an excuse to stop him coming aboard. “Following the detention of the vessel by Australian Maritime Safety Authority at our urging, five crew will be repatriated from Melbourne to the Philippines, including the captain and a number of engineers.

The ship is not permitted to leave port until the company gets these tired and fatigued seafarers home and replaced by fresh crew,” said Purcell. Purcell said that the just-in-time nature of importing new vehicles means the shipping company would be losing upwards of $100,000 per day as the vessel laid idle in the waters surrounding Melbourne.

The MV Metis Leader was previously due to leave the Port of Melbourne at 3pm AEST on Wednesday. At Thursday evening the ship was stuck in Melbourne, at likely significant cost to the company, Purcell added.

“We believe the intention of the Japanese owners of the ship, NYK, was to slip through Melbourne undetected and sail to Jakarta with yet another promise to the crew that they would be returned home to their families at the next port.” As informed, the vessel passed through several countries that allow the changeover of seafarers, including Singapore.

The action is being announced as the Australian maritime safety Administration (AMSA) resumes the enforcement of the MLC requirements on maximum allowed periods for seafarers to remain at sea. Prompted by COVID-19 crew change restrictions, AMSA adopted a more flexible approach to these rules to facilitate global trade. However, as of October 1, further contract extensions will no longer be accepted as AMSA fears for the well-being and mental health of seafarers.

“Crew change is possible in ports right across the world. We have been living with Covid-19 for eight months now, and so there is no excuse for delaying or deferring crew change,” ITF Australia Coordinator Dean Summers said.

“Repatriating crew and replacing them with a fresh team is the responsibility of employers and ship owners – and we will act to see that responsibility honoured for every single seafarer.”

Until September 14, Panama allowed a shipowner to request consideration of 3 month contract extensions on vessels flagged to their registry by 3 months on top of the 11 months provided by the MLC.

After that date, Panamanian authorities have only been considering and granting extensions to exceptional cases. According to the ITF, the Metis Leader crew from the Philippines are now off the ship and returning to their home country via the Melbourne Tullamarine Airport.

A replacement Australian captain and engineer has been engaged by the ship owner’s agents.

The departing and remaining crew have been instructed by the company not to speak to media, the union pointed out The detention follows a string of ship arrests by the Australian Port State Control ASMA since the crew change crisis began, including stopping the alumina carter the MV Unison Jasper in Newcastle, NSW.

The ship was laid up for a number of weeks while the fresh crew were flown in, to replace those who were rescued after being on board for longer than 14 months.

This news is a total 2464 time has been read
Tags: AMSA , Australia , crew change , ITF , seafarers