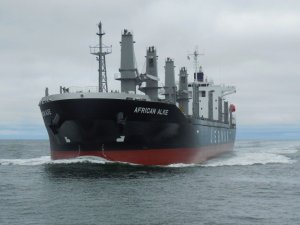 Australian authorities have detained a Panama-flagged bulk carrier in Brisbane after officials found that the crew was untrained in the operation of the ship’s electronic navigation equipment.

The Brisbane Times reports that the bulk carrier African Alke was detained Thursday after a port state control inspection revealed the bridge officers on board were unable to operate the ship’s ECDIS.

“The vessel was detained because the safety management system had not identified a lack of on board familiarisation training in the use of ECDIS,” an AMSA spokesman told the Times.

“The ship’s operators have flown an ECDIS trainer in from Singapore to train the crew,” the spokesman added. “AMSA will release the ship from detention once it is satisfied the crew have been trained to an appropriate standard and can demonstrate the expected level of competency.”

The African Alke was only recently delivered this past April and is on a long term charter with Jebmur Shipping, with Dubai-based MUR Shipping acting as manager. The crew is supplied by B&S Enterprise from Japan, the Brisbane Times reports.

The Maritime Union of Australia says that this just serves as a prime example why you shouldn’t replace high-quality officers with cheap foreign crews on flag of convenience vessels.

Adding to the seriousness of the case, MUA Queensland branch secretary Bob Carnegie said that the ship had just sailed through the Great Barrier Reef on its journey to Brisbane from Mackay, Queensland. African Elke’s voyage actually originated in Portland, Oregon, where it made its maiden voyage on the Columbia River in April.

This news is a total 30673 time has been read
Tags: Australia Finds Detained Bulk Carrier’s Crew Was Unable to Operate the Ship’s ECDIS