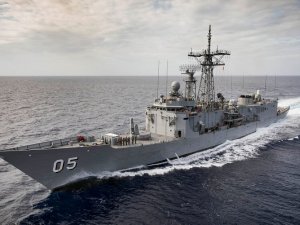 According to news released on December 27, 2019, to the Australian Newspaper website "The Australian", the Australian government will sell two second-hand Adelaide-class guided missile frigates (FFG)

According to news released on December 27, 2019, to the Australian Newspaper website "The Australian", the Australian government will sell two second-hand Adelaide-class guided missile frigates (FFG) to Chile including the HMAS Melbourne and HMAS Newcastle that were commissioned in the early 1990s and lauded in 2008.

The Australian Navy frigates are the last of six Adelaide-class vessels to be retired. They will be replaced by three new air warfare destroyers.

According to military sources of Chile, the acquisition of the former HMAS Melbourne and HMAS Newcastle is expected to be finalized by the end of the year, with their transfer taking place in 2020. The Australian frigates will replace two former Royal Netherlands Navy air defense frigates of the Jacob van Heemskerck class acquired in 2004 and known as the Latorre class in Chile.

These ships were used primarily by the Australian Navy as air defense vessels, armed with a Mark 13 missile launcher for SM-2 missiles. They also have significant anti-surface capability, being armed with a 76-millimeter (3.0 in) Mk 75 gun and the Harpoon ASM (also fired by the Mark 13 launcher), and a pair of triple torpedo tubes for ASW. In addition, two S-70B Seahawk helicopters are carried.

The Australian frigates were originally fitted with American Mark 46 anti-submarine torpedoes, but by 2008, they had been replaced with the European MU90 Impact torpedo in three of the four frigates as part of the FFG (Future Frigate program) Upgrade.

The HMAS Melbourne Adelaide class guided missile frigate is also equipped with a sophisticated computer-based command and control system that fully integrates her significant suite of weapons and sensors to enable rapid and effective weapon employment when required.

Designed for helicopter operations, Melbourne (III) is capable of embarking and employing the new MH-60R ‘Romeo’ helicopter further extending the reach and lethality of the ship. With a full flight embarked, Melbourne (III) can accommodate up to 232 officers and crew.

This news is a total 1249 time has been read
Tags: class guided missile frigates to Chile, HMAS Melbourne Adelaide