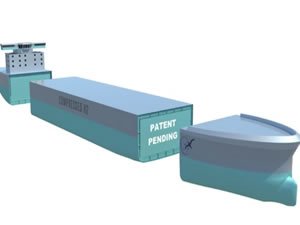 Global Energy Ventures’s H2 Ship project was unveiled today, designed to carry up to 2,000 tonnes of compressed hydrogen. The company will now seek to get approval in principle for the vessel design from ABS next year.

The Australian backers of a much hyped compressed natural gas carrier have come up with a new compressed hydrogen ship design.

The company will now seek to get approval in principle for the vessel design from ABS next year.

“Over the course of 2020, the company has been closely monitoring the growing support for hydrogen as a clean energy source.

In our view, the application of GEV’s compressed hydrogen vessel will be very competitive against other marine transport options, particularly to Australia’s regional Asia Pacific customers.”

The ship and its cargo system are in the patent process.

The containment system will include ambient temperature hydrogen at a target pressure of 3,600 psi or 250 bar.

With the rapid advancement fuel cell technology for vessels, GEV intends to include engines that burn pure hydrogen.

There is a growing list of Australian hydrogen projects moving through successful pilots and into a domestic scale-up phase that have export plans.

GEV said today the key to driving down the economics of hydrogen production will be scale and the key to scale will be developing an export industry.

The company is best known for developing compressed natural gas (CNG) carrier designs, although a debut order for this novel ship type has met many hurdles.

In July, GEV entered into an agreement with Chinese yard CIMC Raffles to extend to December 31 a letter of intent to build a series of CNG carriers.

Hydrogen carrier designs are still relatively thin on the ground despite all the hype about the fuel’s potential in recent years.

This news is a total 1252 time has been read
Tags: CIMC Raffles , hydrogen carrier , Australian