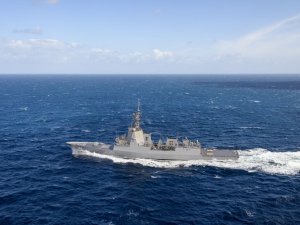 The Australian Defence Force’s third Air Warfare Destroyer (AWD), NUSHIP Sydney, is on track to be delivered to the Navy in February 2020 after completing sea trials.

Sydney is the third and final ship being delivered by the Air Warfare Destroyer Alliance which includes the Department of Defence, Raytheon Australia, and ASC Shipbuilding supported by Navantia Australia. Minister for Defence, Senator the Hon Linda Reynolds CSC said the success of Sydney’s sea trials represents a significant step towards its delivery.

The keel of Sydney was laid down on 19 November 2015 and launched on 19 May 2018 by Mrs Judy Shalders in Osborne, South Australia. Sydney is based on the Navantia designed F100 frigate and is coupled it with the Aegis Combat System. The Aegis Combat System incorporating the state-of-the-art phased array radar, AN/SPY 1D(V), in combination with the SM-2 missile, will provide an advanced air defence system capable of engaging enemy aircraft and missiles at ranges in excess of 150km. Sydney will carry a MH-60R helicopter for surveillance and response to support key warfare areas.The surface warfare function will include long range anti-ship missiles and a naval gun capable of firing extended range munitions in support of land forces. Sydney will also conduct undersea warfare and be equipped with modern sonar systems, decoys, surface-launched torpedoes and an array of effective close-in defensive weapons. These capabilities ensure that the Hobart class guided missile destroyers have the layered defensive and offensive capability required to counter conventional and asymmetric threats.

“Today’s milestone is another example of the Liberal and National Government’s successful initiative to reform the AWD program, setting the scene for the Naval Shipbuilding Plan,” Minister Reynolds said. “Sydney will enter into service early next year, and with her sister-ships HMA Ships Hobart and Brisbane, they will be the most potent warships to date. “By using a combination of Australian and globally proven technologies, these highly capable warships are truly world-class and will allow us to work even closer with our allies.”

This news is a total 294 time has been read
Tags: Australian Navy, Sydney Air Warfare Destroyer in 2020