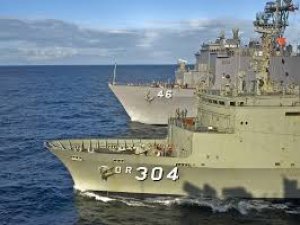 HMAS SUCCESS, commanded by Captain Justin Jones, RAN, departed Sydney November 23rd for a six month deployment to the Middle East region to provide logistic support for coalition forces as part of the Australian Defence Force contribution to maritime security in the region. 090710-N-5538K-013 During its support to Operation OCEAN SHIELD, SUCCESS and its crew of 235 will contribute to partnership with counter-piracy forces in the region through replenishment at sea (RAS) and combined training, while patrolling in the area of operations. In addition to its RAS capabilities, the ship features an embarked helicopter and boarding team that will contribute to counter piracy deterrence. “We are delighted to partner with our Royal Australian Navy colleagues in NATO’s counter-piracy mission,” said Vice Admiral Peter Hudson CB CBE, Commander of NATO Allied Maritime Command and Operation OCEAN SHIELD. “Australia has a proud tradition of support to NATO operations, and we welcome the opportunity to strengthen ties between our maritime forces.”