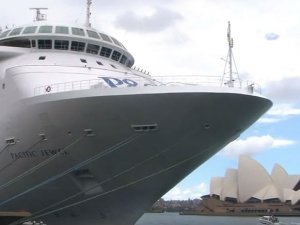 Commissioned by Cruise Lines International Association (CLIA) Australasia, the report revealed that cruise line expenditure exceeded A$1.5 billion, up 12 percent on the previous financial year, while direct passenger expenditure rose 19.8 percent to almost A$1.2 billion. The indirect and induced contribution of cruise tourism made up the rest of the figure.

With a record 58 cruise ships sailing local waters in 2016-17, and more than half offering local itineraries, there was a 19 percent increase in cruise ship visit days to 1,401 in total. Ship visit days for homeported vessels increased by 14.5 percent while transit ship visit days jumped 23 percent. Passengers spent on average A$527 a day in a port before or after their cruise, compared to A$153 during a transit day, adding up to a total of A$976 million, or 85 percent of total passenger expenditure.

However, infrastructure constraints in Sydney threatens further growth of the industry. According to the report, New South Wales remains the dominant cruise state, accounting for 58 percent of the industry’s economic contribution, but its six percent growth last financial year means its share has dropped 10 percent in just two years due to Sydney reaching capacity.

A number of options are being proposed to alleviate the limitations of Sydney cruise terminal infrastructure. A second terminal, at White Bay is operational, but an estimated 60 percent of the 81 cruise ships on order globally would be unable to fit under the Sydney Harbour Bridge to reach it. Proposals include a terminal at Garden Island, a terminal in Botany Bay and double stacking (the daily turnaround of two cruise ships) at the Sydney Harbour terminal. Local media reports indicate that Carnival and Royal Caribbean have ruled out this last option.

NSW’ sluggish growth had positive flow on effects for other states with Queensland up 14 percent to now represent 21 percent of the national economic contribution or more than $1.1 billion, and Victoria experiencing a 12 percent increase to take a seven percent share of the national contribution. Meanwhile increased ship deployments to Western Australia and Tasmania in 2016-17, saw both these states experience substantial growth.

On the strength of Queensland' growing industry, the government has announced the construction of the $158 million Brisbane International Cruise Terminal. The terminal building itself will be around 9,300 square meters set over two levels and connected to a 200-meter long wharf, with two air bridges facilitating the movement of passengers on and off ships. Once the terminal is operational, it is expected the additional cruise ships stopping in Brisbane will continue their journey up the coast to destinations like Cairns and give visitors the opportunity to visit iconic destinations such as the Great Barrier Reef.

This news is a total 618 time has been read
Tags: Australia's Cruise Industry Hits Record High