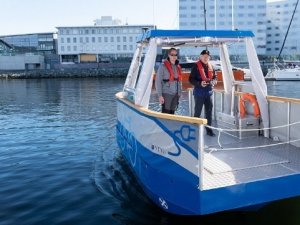 Researchers at the Norwegian University of Science and Technology (NTNU) are developing a small autonomous passenger ferry in Trondheim, Norway, a region that has opened its doors for testing self-driving ship technology.

NTNU's Departments of Electronic Systems, Technical Cybernetics and Marine Engineering are developing a prototype driverless ferry that can carry a dozen passengers on calm inland waters. The initial test route crosses a 100-yard-wide channel in Trondheim's Ravnkloa district, and when the ferry enters into full operation it will cut 10-15 minutes off the walking time between the areas on either side of the waterway.

A half-scale, 16-foot-long version of the electric ferry is already built, and it is in use for testing batteries and propulsion systems (photo above). The research team is now working on autonomous docking, driverless navigation systems and collision-avoidance sensors. "We will use four different sensors. It will be radar, infrared camera, optical camera and LIDAR (light detection and ranging). This will be a robust system of sensors that complement each other," said Edmund Brekke, associate professor at the Department of Technical Cybernetics, NTNU. Land-based sensors will also be deployed on the fixed route in order to provide additional traffic detection capabilities.

Once these systems are developed, a full-scale model will be built and tested, with a shore-based driver operating it by remote control. This testing phase is scheduled for next year. Ultimately, the team wants to deploy a model that is capable responding to the push of a single button, with a user experience that is little different from calling an elevator.

The researchers are confident that self-driving ferries will prove popular if they can be developed into a reliable commercial product. "Driverless ferries can become a new tool in the toolbox for town planners, said Prof. Egil Eide of NTNU's Deptartment of Electronic Systems. "If we succeed with everything we plan to do, then there is no doubt the market is there."

In its mission statement, the team asserts that autonomous vessels could help revitalize and develop Norway's coastal areas with low-cost waterborne transportation. In this vision, the technology has the potential to create new markets and offer new transport services that do not exist today due to high crew costs.

This news is a total 946 time has been read
Tags: Autonomous Mini-Ferry Moves Forward in Trondheim