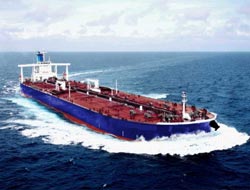 ?It's been a long while since this happened, but currently there is a shortage of available VLCCs for the Middle East Gulf (MEG) routes,? a Singapore-based broker told.

Average spot rates for MEG-Japan voyages jumped more than 30 Worldscale points from last week to stand around WS 72.5 this week, while voyages west from the MEG moved from WS 32.5 to WS 52.5 this week, said Fearnleys Wednesday.

Latest rumours indicate SK Corp is to fix a TMT VLCC to carry MEG crude to South Korea at WS 75.

Earnings per day for MEG-East VLCC routes are said to be crossing the $80,000 mark.

Most players are attributing rising spot VLCC rates to the increasing number of supertankers being taken up to store crude oil for sale at a later date.

?The substantial number of VLCCs removed from the market, either for storage or for voyages with storage options...produced the present more owner-friendly atmosphere in the market,? said Fearnleys.

A senior Frontline Ltd. official said last week that traders are currently looking for some 10 VLCCs to store crude oil.

This is on top of the 25 VLCCs that have already been fixed in the past few weeks for floating storage purposes, said Jens Martin Jensen, interim CEO of Frontline's management arm.

Latest reports indicate that more than 35 VLCCs have been booked to store crude and some players are estimating that up to 80 million barrels of crude are either being moved to land-based storage aboard a supertanker or already locked in floating storage.

Traders tell that storage has become attractive due to contango in the crude oil market, with near-term futures contracts cheaper than contracts further into the future.

An oil consultant had said in December that the present contango was the biggest for a 12-month span of futures since 1998.

According to statistics from Drewry Shipping Consultants, 35 VLCCs translates to about 7% of the global VLCC fleet.

This news is a total 1023 time has been read