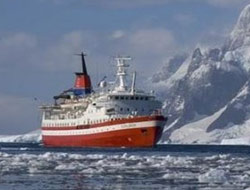 The IMO's environment committee recognised campaigners' fears that the continent's waters were at risk from the rising number of ships in the area. Environmentalists said the sinking of the M/S Explorer in 2007 was a wake-up call to tighten rules in the region. The meeting also agreed to curb emissions from commercial vessels.

A paper submitted by a coalition of environmental groups called for the IMO to ban ships fuelled by heavy oil or without reinforced hulls from the area's waters. It also called for restrictions on sewage and waste water discharges to be tightened.

"Everyone that spoke at the meeting was supportive of the paper," said Sian Prior, a spokeswoman for the Antarctic and Southern Ocean Coalition (ASOC).

"I think it was generally agreed that more needed to be done about shipping in Antartica," she told BBC News. "The challenge now is to come back with concrete measures that need to be done."

The International Association of Antarctica Tour Operators show that 37,552 tourists visited Antarctica during 2006-07, the majority arriving by sea.

ASOC is concerned that many of the vessels carrying them are not ice-strengthened. This makes serious accidents more likely, and increases the risk of an oil spillage if a ship gets into trouble.

They have documented six incidents in little more than a year which carried a risk of major contamination, the most notable being the holing of the M/S Explorer - probably by an iceberg - which resulted in the vessel sinking and an international rescue mission for passengers and crew.

Antarctica is the unique home to several varieties of penguin, an important base for others such as seals, and a vital feeding ground for whales.

A spokesman for the IMO said the committee had discussed the issue, and called on nations to submit proposals to address the concerns outlined in the paper.

The main change would lead to a reduction in sulphur dioxide and nitrogen oxide emissions from the world's 50,000 strong fleet. The regulations have been ratified by 49 nations, which account for almost three-quarters of the globe's merchant vessels.

The IMO has also established a working group to look at ways to curb greenhouse gases, primarily carbon dioxide. It is scheduled to complete its work in 2009, in time for the IMO to submit its findings and recommendations to a key UN climate conference.

This news is a total 2187 time has been read