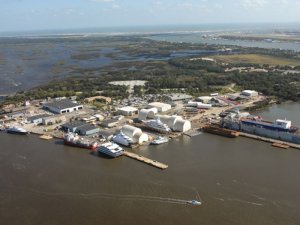 acksonville, Florida, is being awarded a $22,459,901 modification to a previously awarded contract to exercise options for post shakedown availabilities (PSAs) for the littoral combat shipsUSS Little Rock (LCS 9) and USS Sioux City (LCS 11).

The PSA encompasses all of the manpower, support services, material, non-standard equipment and associated technical data and documentation required to prepare for and accomplish the PSA. The work to be performed will include correction of government-responsible trial card deficiencies, new work identified between custody transfer and the time of PSA, and incorporation of approved engineering changes that were not incorporated during the construction period which are not otherwise the building yard's responsibility under the ship construction contract. Work will be performed in Jacksonville, Florida, and is expected to be completed by February 2019.

Fiscal 2017 and 2012 shipbuilding and conversion (Navy); and fiscal 2017 other procurement (Navy) funding in the amount of $14,574,242 will be obligated at time of award and will not expire at the end of the current fiscal year.

The Naval Sea Systems Command, Washington, District of Columbia, is the contracting activity.

This news is a total 691 time has been read
Tags: BAE Jacksonville gets $22.4 million for LCS work