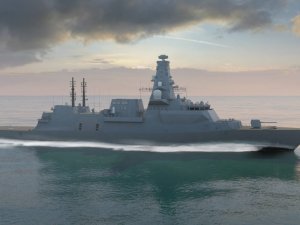 BAE Systems said it has begun to build the first of the U.K. Royal Navy’s new Type 26 Global Combat Ships.

Sir Michael Fallon MP, U.K. Secretary of State for Defense, visited the builder’s Glasgow shipyard to press the button to officially commence production on the new warship, and during his speech revealed the vessel’s name: Glasgow.

This ceremonial event follows the U.K Government’s recent award of a contract worth approximately £3.7 billion for the first three ships to be built at BAE Systems’ sites in Glasgow. This builds on the work already underway to construct five River Class Offshore Patrol Vessels and provides a strong foundation for the next two decades of shipbuilding in Scotland, securing more than 4,000 jobs across BAE Systems and its U.K. maritime supply chain.

“Today marks yet another historic milestone for the Royal Navy, Scottish shipbuilding and U.K. Defense more widely. Glasgow will protect our powerful new aircraft carriers and nuclear deterrent, keeping British interests safe across the world,” said Defense Secretary, Sir Michael during his visit to the shipyard.

“The Type 26 is a cutting-edge warship that will maintain our naval power with a truly global reach. Designed for a service life of at least 25 years, the Type 26 Frigates will form a backbone of the future Royal Navy surface fleet into the 2060s.”

According to the shipbuilder, the Type 26 Global Combat Ship will be a world-class antisubmarine warfare ship, replacing the Type 23 anti submarine variant frigates, with the first ship due to be delivered to the Royal Navy in the mid 2020s. Globally deployable, the flexible mission bay, aviation facilities and combat systems ensure it will be capable of undertaking a wide range of roles from high intensity warfare to humanitarian assistance, either operating independently or as part of a task group. BAE Systems said it is exploring potential export opportunities where it has strong interest from international customers.

Type 26 is cutting edge in terms of its capability and benefits from the latest advances in digital technologies, including 3D and virtual reality, to ensure that the ship’s design is refined earlier in the process. This has enabled BAE Systems to work in collaboration with the Ministry of Defense and the Royal Navy to ensure every zone of the ship has the requirements of its crew at the heart of the design.

Iain Stevenson, Managing Director, BAE Systems Naval Ships, said, “This is an extremely proud day for our employees across the U.K. and our wider U.K. maritime supply chain. Providing our customers with next generation platforms and technologies that give them an essential edge is what inspires us. Working with the Ministry of Defense and the Royal Navy we have designed the Type 26 in a fully digital environment and have now seen her through the eyes of her crew in a 3D environment. Through this approach we have a mature ship design that is ready for manufacture.”

This news is a total 648 time has been read
Tags: BAE Systems Begins Building UK’s Next Warship