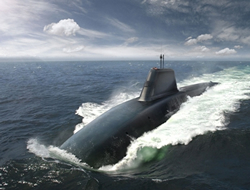 Two contracts worth £47 million and £32 million have been awarded to BAE Systems Maritime-Submarines, based in Barrow-in-Furness, Cumbria, who are leading on the design of the vessels.

The investment will allow BAES, who currently have more than a thousand people working on the Successor programme, to begin work on some initial items for the submarines that are due to replace the Vanguard Class from 2028.

It is essential these items, which include structural fittings, electrical equipment, castings and forgings are ordered now to ensure the submarines are able to meet their in service date.

The submarines are being designed to be some of the stealthiest in the world and are expected to see operational service from the late 2020s right up to the 2060s.

The MoD has also released a picture yesterday which shows for the first time how the early designs of Successor are taking shape. The image forms part of an update on the Successor programme that has been presented to Parliament.

The Successor design and build programme is amongst the most complex ever undertaken by British industry.

The total number of MoD and industrial staff currently working on the Successor programme is around 2,000, with more than half working as engineers and designers.

Over 850 potential UK suppliers have so far been identified as benefiting from investment in the programme and as many as 6,000 people will be involved by the time that the construction reaches a peak.

This news is a total 1534 time has been read