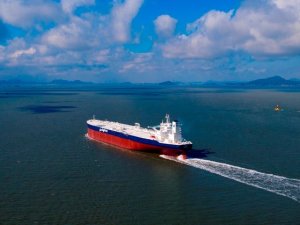 The new addition is the fourth of five VLCCs to be received this year from South Korea-based Hyundai Samho Heavy Industries (HSHI), the world’s largest shipbuilding company.

‘Khurais’ was delivered at a ceremony held at HSHI’s Mokpo shipyard in South Jeolla Province, South Korea, on 10 April 2018. Capable of transporting two million barrels of crude oil, the 300,000-DWT carrier is the ninth of 10 VLCCs ordered from the South Korean shipbuilding company as part of Bahri’s strategic long-term maritime growth and expansion plan.

“This latest addition to Bahri’s fleet of VLCCs consolidates our standing as a global leader in the crude oil transportation industry and gives us a greater competitive edge. We will leverage the resulting improvements in efficiency to cater for the steadily increasing demand for crude oil transportation and bring added value to our clients and stakeholders,” said Eng. Abdullah Aldubaikhi, CEO of Bahri.

“The addition of the new vessel further enhances our capabilities and underlines our commitment to objectives of the Saudi Vision 2030. We are proud to play a key role in maintaining the Kingdom’s pre-eminent position as a key strategic regional hub and logistics gateway across three continents,” he added.

This news is a total 847 time has been read
Tags: Bahri Adds New VLCC Khurais