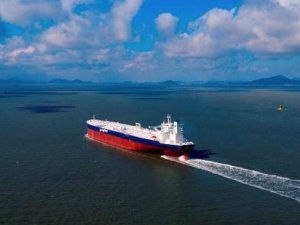 "Continuing its strong start to 2018, Bahri accepted the delivery of ‘Lawhah to further cement its market-dominant position in crude oil transportation," said a press release.

The vessel, which lifts the total number of the company’s multipurpose fleet to 90, is the second of five VLCCs to be received this year from Hyundai Samho Heavy Industries (HSHI), the world’s largest shipbuilding company based in South Korea.

Bahri took the delivery of Lawhah at a ceremony held at the HSHI’s Mokpo shipyard in South Jeolla Province, South Korea, on February 1, 2018. With 43 VLCCs in its fleet, the company has consolidated its position as the largest VLCC owner and operator worldwide.

The 300,000-DWT carrier is part of the 10 VLCCs Bahri signed with the South Korean company in May 2015 in line with Bahri’s ambitious maritime growth and expansion plan. The transportation and logistics industry leader has received seven vessels, and the remaining three carriers will be delivered in the first half of 2018.

“The addition of Lawhah to Bahri’s already strong fleet is an extension of the outstanding performance we delivered in 2017. With the new VLCC, we now have a greater competitive advantage in the global crude oil transportation industry to expand our customer base and offer reliable and efficient services across local and international markets. It will further enhance the efficiency of our fleet to enable us to cater for increased demand for crude oil transportation,” said Eng. Abdullah Aldubaikhi, CEO of Bahri.

“The addition of the new vessel has further strengthened our resolve to contribute to Saudi Arabia’s endeavors to diversify its economy and reinforce its pre-eminent position as a strategic regional hub and logistics gateway across continents. Bahri will remain firm in its commitment to the Saudi Vision 2030 and the untiring efforts of the Kingdom’s wise leadership to position the country as a global economic powerhouse,” he added.

On January 23, 2018, Bahri accepted the delivery of ‘Kassab,’ its first VLCC for the year, within days after Eng. Aldubaikhi took the helm as the chief executive of the company.

This news is a total 881 time has been read
Tags: Bahri Adds VLCC 'Lawhah' to its Fleet