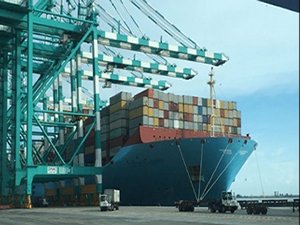 While the container shipping industry is particularly vulnerable to changes in consumer spending, the major carriers were successful in managing their business to produce strong results in the first half of 2020.

However, according to a new analysis from the shipping association BIMCO, the container shipping industry will be challenged to manage capacity in the face of uncertain volumes to maintain profitability going forward. The forecast is for a long and drawn-out recovery.

In its new analysis, BIMCO highlights that capacity management has been a key factor for success as the industry was confronted by declining volumes because of the pandemic. Carriers achieved high freight rates and profitability through large-scale capacity reductions by blanking sailings, cost savings due to lower fuel prices, and by returning ships to tonnage providers. Tonnage providers, BIMCO says, suffered the most as they were left with idle ships due to the low volumes.

The months of April and May were globally the worst months for container shipping volumes as the lockdowns were in place in many countries. Volumes were down between 11 and 14 percent in those two months with the strongest declines coming from traffic from the Far East to Europe and North America and smaller declines intra-Asia. BIMCO notes that there were also declines on the secondary trade routes intra-Europe, Europe to North American, and North America to the Far East.

Despite the lower volumes, the freight rates held firm partially because of the long-term contracts as well as the efforts of the shipping companies primarily in blanking sailings to match volume declines. Shipowners are also moving more aggressively to scrap tonnage with BIMCO reporting that they expect in total 300,000 TEU of capacity with be demolished, with more than half of that level already haven been demolished at this point in the year. They highlight that both newer and larger ships are being sold for scrapped as owners moved to rid their fleets of older, smaller and substandard vessels. Declines in volumes have pushed newer, larger more efficient ships into smaller markets which in turn has also contributed to the scrapping of older ships.

Additionally, BIMCO points out that they are forecasting a four-year low in fleet expansion with just over a two percent increase in TEU volume this year from the addition of new ships. Shipbuilding contracting levels are also down by a third driving the orderbook to its lowest level in 17 years.

The efforts to control capacity by blanking sailing permitted carriers to maintain and elevate freight rates. In particular BIMCO highlights strong increases in the spot rates from the Far East to the US.

While container volumes remain considerably lower than 2019, they began to recover in June and July. As a result, the lines have reinstated sailings and stopped blanking future sailings. While that was good for the charter market, it also is creating concerns that BIMCO highlights for the outlook in the overall container shipping segment.

They believe that shippers have been front-loading shipments to ensure that they have goods in place in case of a second wave of the coronavirus and new lockdowns. Forecasts for consumer spending and the potential of a global recession seem to support BIMCO’s viewpoint.

While volumes have started to recover, they believe that consumer demand remains down and that government efforts to scale back stimulus efforts will contribute to high unemployment and lower consumer income. Among the other indicators that they are looking at are US housing starts and new construction which remains at lower levels. “BIMCO has previously estimated that there is a 22-month time lag between housing starts and container imports in the US,” the analysis highlights.

“As capacity is reinstated without a permanent recovery in demand, however, carriers find themselves balancing on a thin tightrope between maintaining market share and freight rates,” predicts BIMCO. They highlight that so far capacity management has been most important element in the maintaining freight rates, but with the front-loading that has been going on, they foresee depressed volumes and freight rates in the future.

Carriers they conclude can continue to manage capacity with efforts such as again blanking sailings and disposing of unwanted ships giving them better tools to weather market conditions. Owners and tonnage providers on the other hand are more likely to be under pressure with the cost of their idle fleets and lower prices or no demand in the charter market.

BIMCO’s full analysis of the outlook for the container shipping sector is available on their website for review.

This news is a total 1905 time has been read
Tags: Balancing Capacity Key to Maintaining Container Freight Rates

Songa Container fetches bumper price for post-panamax boxshipThe vessel was sold for $42.3m, far in excess of the $32.7m valuation according to both VesselsValue and MSI. The buyer was not named. Songa had originally picked the ship up for just $23m.

ZIM makes disappointing NYSE debutIsraeli carrier ZIM’s IPO fell 23.2% on the first day of trading at the New York Stock Exchange with shares closing at $11.52, having started out at $15.