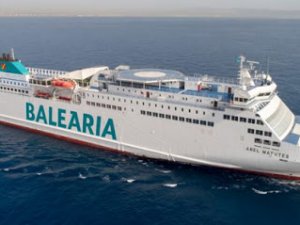 Spanish shipping company Baleària wrapped up 2019 with turnover and EBITDA growth of 19 per cent.

According to the figures recorded in the tenth Corporate Social Responsibility and Sustainability Report for 2019 released by the company this month, the shipping line registered a turnover of EUR 452 million last year.

The volume of cargo covered a length of 6,111,000 metres, 5 per cent more than the previous financial year, equivalent to 466,000 trucks. As explained, 75 per cent of cargo was transported by the company’s ships on the Balearic routes.

The greatest increase in passenger numbers was seen on the routes between the Spanish mainland and the Balearic Islands, while there was in turn a significant reduction in traffic during the peak season on the Strait of Gibraltar crossing.

Meanwhile, EBITDA registered an increase of EUR 84 million, 19 per cent higher in relative terms. This figure meant that the net profit also rose by 5 per cent, to EUR 29 million. Both these numbers serve to highlight the company’s solvency in overcoming this crisis, according to Baleària.

The company also announced that its shareholders are foregoing any dividend payment to strengthen Baleària’s position in response to COVID-19.

Eco-efficient growth, based on respect for the planet and digital transformation, is said to provide the backbone of the Baleària business model.

In this regard, the company added two new smart ships and replaced the engines on another two in 2019, making Baleària the first company to sail the Mediterranean, Canary Islands and Strait of Gibraltar using natural gas.

“The plans are for the LNG fleet to comprise nine ships by 2021,” Baleària said.

“There are also plans to include other CO2-neutral alternatives to fossil fuels in the future, such as renewable gas and hydrogen.”

The use of cleaner forms of energy is in line with the company’s short- and medium-term digital transformation and innovation strategy. Last year, the digitalisation process saw six vessels converted into smart ships — by next year there will be a total of eleven such vessels — with progress made in the digital transformation of embarkation and disembarkation processes and the travel experience in the case of passengers, as well as cargo operations in port on the freight side, to achieve more streamlined and convenient logistics.

The move to digital is said to extend to every area of management with the aim of turning the shipping line into a data-driven company, using big data to reach decisions.

In 2019, a fleet control tower project began, serving as a tool to provide real-time data about safety, preventive maintenance, commercial efficiency and sustainability.

The first phase of this initiative focuses on monitoring emissions of pollutant gases through the European Green and Connected Ports project, with Baleària installing sensors and measurement equipment on five ships by 2022.

This news is a total 468 time has been read
Tags: Balearia , earnings