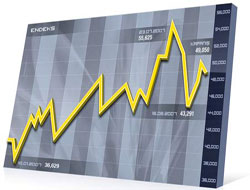 Baltic Dry Index, the global benchmark for freight rates of dry bulk carriers, dropped to more than a six-year low that may force ship owners to keep a fifth of their global fleet idle.

Baltic Dry Index, the global benchmark for freight rates of dry bulk carriers, dropped to more than a six-year low that may force ship owners to keep a fifth of their global fleet idle.

The key index fell below 1,000, dropping 92 per cent from its all-time high about five months ago. The drop in the freight rate for dry bulk carriers may also lead to cancellation of long-term contracts by traders.

Indian shipping companies earn at least half of their revenue from long-term contracts. The ongoing financial crisis and the resultant drop in economic growth has adversely affected global trade leading to a drop in demand for ships.

Demand of dry bulk ship from countries such as China and Brazil, which accounts for a large chunk of steel and coal trade, has shrunk. The global liquidity crunch has also made it difficult for traders to obtain letters of credit.

?For dry bulk, it is trying time,? said S Hajara, chairman and managing director of India"s largest shipper The Shipping Corporation of India. ?We are hoping its temporary,? he added.

The public sector company has already placed order of 32 ships and has planned for new orders of 40 ships. ?Now there could be a delay in placing the new orders,? said Hajara. The company wanted to place these orders by 2010-11.

According to Navi Mumbai-based shipping consultancy i-maritime, the daily operating cost of a 70,000 tonner Panamax ship is $7,000. However, in the spot market, average rate has come down below $5,000.

?If the rates continue at this level for three to six months then 10 per cent to 20 per cent of the fleet will have to be kept idle,? said Ramesh Singhal, chief executive officer, i-maritime.

?We fear that the freight rate may get worse,? said another industry analyst who did not wish to be quoted. ?In such a case, time charter market may crash,? he added.

However, the 92-per-cent drop in the index has surprised the industry and its analysts.

?I had never thought of this level,? said Vikram Suryavanshi, shipping analyst with Mumbai -based brokerage Karvy Stock Broking.

?Companies will have to use the money that they earned in last two to three years to sail through the tough time,? he added.

This news is a total 1259 time has been read