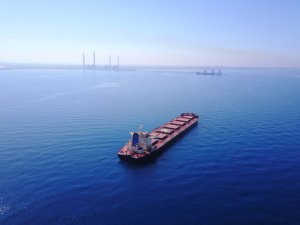 Changes to the Baltic Exchange’s main sea freight index has created the possibility of it becoming a tradable instrument for the first time, industry officials said on Thursday.

With about 90 percent of traded goods by volume transported by sea, non-specialist investors want a way capitalise on a recovery in shipping as it emerges from a near-decade long downturn due in part to a glut of vessels ordered.

He said the changes to the BDI, which would be effective from March 1, made that possible.

“We’re excited by the prospect of exchange traded funds based on the BDI and are confident that the BDI will remain an accurate general measure of the health of the dry bulk shipping markets,” Albertijn said in the statement.

Singapore Exchange acquired the London-run exchange in 2016 and since then the Baltic has been looking for new markets to develop.

The BDI was previously calculated using four sizes of dry bulk ship classes – each with an equal 25 percent weighting.

From March 1, the exchange is dropping the smallest dry ship segment – called handysizes – and will alter the weighting of the three biggest classes.

“We have listened carefully to feedback from Baltic Exchange members and the majority were enthusiastic about the changes and the opportunities it offers,” Baltic Chief Executive Mark Jackson said.

Founded in 1744 as a forum for chartering vessels, the Baltic Exchange produces benchmark indices for global shipping rates, including ones used by the multi-billion dollar freight derivatives (FFA) sector.

Albertijn told Reuters the BDI was compliant with principles set by global securities regulatory body IOSCO. “In its new composition the BDI has become more tradable through the existing FFA markets,” he said.

Some shipping players have expressed concern about the changes. One of them, leading ship broker Howe Robinson Partners, said it “was at a loss” to explain why the exchange was replacing one fixed weight system with another that would omit 12 percent of the global dry bulk fleet.

“The removal will almost certainly misrepresent the market, because handysize rates are less volatile than those of larger ships,” Howe Robinson said in a report.

The new weighting of the BDI, which has been published by the exchange in various forms since 1985, will comprise 40 percent capesizes, 30 percent panamaxes and 30 percent supramax ships.

This news is a total 463 time has been read
Tags: Baltic Dry Index to Become Tradable After Benchmark Changes