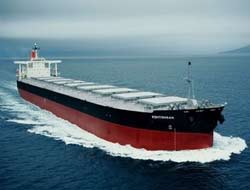 The Baltic Exchange's chief sea freight index for dry commodities trade on Wednesday recorded its biggest one-day drop since records began in 1985 as financial markets fretted over the risk of a U.S. recession.

The Baltic Exchange's chief sea freight index for dry commodities trade on Wednesday recorded its biggest one-day drop since records began in 1985 as financial markets fretted over the risk of a U.S. recession.

The London-based exchange said the index .BADI, which monitors major trade routes for coal, iron ore, cement and soft commodities such as grains and sugar, sank 421 points, 5.74 percent, to 6,915 -- a five-month low. The index, widely watched by economists and commodity traders who use it to gauge world demand, has now seen three of its largest one-day falls in less than a week.

It has sunk 37 percent since a record high in November, which was mostly spurred on by rapid industrialisation in China and India and robust world economic growth. Since then, financial markets have taken a severe knock as worries over the health of the U.S. economy have deepened. But Jeremy Penn, chief executive of the Baltic Exchange, echoing the view of other analysts, held back from linking it to recessionary woes. "I don't think we've seen any evidence of that, I really don't," he told Reuters.

"We've certainly seen a pretty significant shift in sentiment since the beginning of the year."

"But I think it's important to take a slightly longer-term view and say 'hey these rates are still healthy by any historic measure'."

Penn said the index was increasingly being scrutinised as a a barometer of health in the developing world and wider economy.

He cited a British media report that Alan Greenspan, ex-Chairman of the U.S. Federal Reserve, had called it an excellent leading indicator of global economic growth.

Shares in several shipping firms have been hit by the decline in the freight index, including Singapore's Neptune Orient Lines, which has seen its stock fall almost 50 percent since the beginning of November.

"There's a lot of negative sentiment, freight futures prices are losing value. A lot of people are spooked and holding back from chartering (ships) as well," said Peter Norfolk, a senior analyst at shipping consultancy Simpson, Spence & Young.

But he said that he thought the main reason for the decline in freight rates was a short-term decline in demand from traders wanting to move commodities around the world.

"Until we see a cracking of these record commodity prices, which we haven't seen yet, then as far as we can tell demand is still pretty strong," he told Reuters.

Analysts have been reluctant to pin the dramatic slide too closely on concerns over a possible U.S. recession.

They have instead tended to attribute the fall to a lack of fresh cargo supply in key global export centres and an expected seasonal slow down in the first quarter.

Other key global shipping sectors, of which dry commodities transportation is only a part, albeit a significant one, are also showing signs of weakness. Core crude oil freight rates on top world oil tanker export routes have slipped from peaks hit in late December due to peak winter demand for winter fuel.

However, oil seaborne freight, a separate shipping sector, has been hit more heavily by surging ship supply than dry freight markets, industry experts say. The outlook for container shipping, carrying finished goods such as toys, clothing and electronic goods to world markets, is similarly wobbling on some of the world's main trade routes.

In the last week, heads of three of the world's biggest container lines have said they expected a slowdown in container trade growth to the United States this year, from double-digit growth in 2007 to just a couple of percentage points at most.

However, they've said all other regions, including intra-Asian trade, should remain strong.

The world's trillion-dollar shipping industry carries more than 90 percent of the world's traded goods by volume.

This news is a total 2006 time has been read