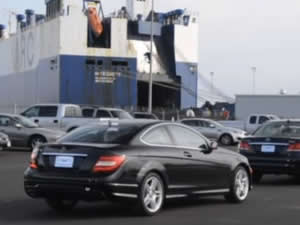 The state-owned public marine terminals at the Helen Delich Bentley Port of Baltimore set two new monthly records set in May. The Port handled 61,058 autos and light trucks besting its previous record of 60,624 set in November 2015. The Port also handled 90,152 TEUs, the most in one month since August 2017 when it handled 88,391.

Next week, Baltimore's Board of Public Works is expected to consider a proposal to turn a wet basin built for ship construction during World War II into seven more acres of storage for cars and other cargo, reports The Baltimore Sun. The project is estimated to cost over $6 million.

The Port of Baltimore handled 38.4 million tons of cargo in 2017, the most since 1979 and the third-highest in its history. The public marine terminals, managed by the MDOT MPA, handled a record 10.7 million tons of general cargo.

The Port’s combined public and private auto terminals also had a record year in 2017, handling 807,194 cars and light trucks. It was the first time surpassing the 800,000 car/light truck mark and the seventh consecutive year that Maryland had handled more cars and light trucks than any other U.S. port.

Among U.S. ports, the Port of Baltimore ranks first for autos and light trucks, roll on/roll off heavy farm and construction machinery, and imported sugar. The Port ranks second in exported coal. Overall, the Port ranks ninth among all ports for the total dollar value of cargo and 12th in foreign cargo tonnage.

This news is a total 1503 time has been read
Tags: Baltimore Sets New Auto Record