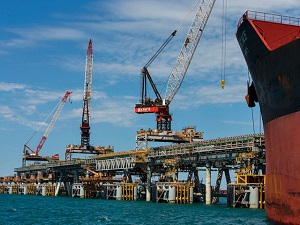 The mobilization and construction works on Rio Tinto Terminal A expansion on behalf of Canada LNG have started, BAM International, part of Dutch BAM Group said.

The location of Terminal B coincides with LNG Canada‘s export terminal in Kitimat, British Columbia, located approximately 600 km north-west of Vancouver. The project will consist of a 320 x 60 metre terminal for the Rio Tinto BC Works, as well as a berth for cargo barges. Both elements will be built on more than 400 steel piles with a concrete deck of approximately 20,000 m3.

BAM and its partners JJM Construction from Canada and Manson Construction from USA expect the USD 108 million project to complete in autumn 2020.  The first phase of construction of LNG Canada export terminal will take approximately five years, with the first LNG expected before the middle of the next decade.

LNG Canada is said to represent one of the most significant energy investment projects in Canadian history, with the total estimated development cost of about USD 14 billion. The facility will initially export LNG from two processing units or “trains” totaling 14 million tonnes per annum (mtpa), with the potential to expand to four trains in the future